A look back at a multidisciplinary high school educational project, inspired by the engraver Escher and facilitated by the use of various digital technologies!

A look back at an educational project combining mathematics and the arts in the 1st year of secondary school, inspired by the engraver Escher and facilitated by the use of various digital technologies present in the creative laboratory.

Catherine falgueyret teaches math in 1st year of high school at Collège Beaubois, in Montreal. She has long admired the Dutch engraver MC Escher. This year, she was able to make creative use of the space, devices and software available at the Beaubois factory, the digital manufacturing workshop (makerspace) of the College, to carry out an interdisciplinary project combining arts, mathematics and digital literacy with its students.

His project took about 6 periods of 75 minutes.

In the first period, students discovered Escher by answering a short quiz about Edmodo platform from the information available on the website of Canadian Museum of Fine Arts.

The next two periods took place in class. The students first applied themselves to making a paving pattern à la Escher. To do this, they chose a geometric figure that they deformed to make the tiling: a square, a rectangle, an equilateral triangle or a parallelogram.

They then used the technique explained in the manual for the transformation. Panoramath, which they use in their math class, or on two links (here and here) accessible from their space on the Edmodo platform.

The last three periods took place at the Fabrique Beaubois or at the college's computer lab. During the first two periods, the students used the software Inkscape, free software and open source drawing that allows the creation and manipulation of objects, among others. The pupils drew the shapes they had previously created. Finally, the third period was devoted to laser cutting.

The mathematical concepts treated in the framework of this project are geometric transformations (reflection, rotation and translation), as well as the Cartesian plane. It is a fine example of interdisciplinary activity facilitated by the use of various digital technologies. here is a short video which shows the result of the students' work:

The Fabrique Beaubois is expanding

Barely a year after its opening, the Fabrique Beaubois will occupy a brand new space of 3,300 sq. Ft. In September, double the current area.

The innovation does not stop there. In fact, we build an adjacent greenhouse where the Farmbot robot gardener. A “revolutionary” ecological concept to explore! 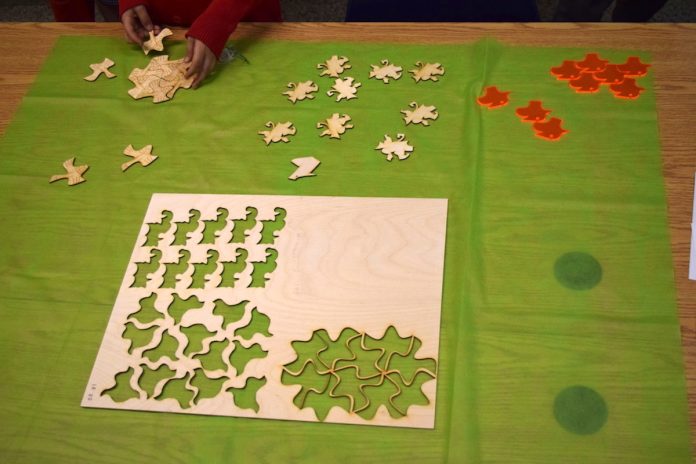 Separate the false from the true

Michel Choquette presents La Fabrique: to give meaning to learning

La Fabrique Beaubois: an educational shift to respond to the call of the new generation