Students with cognitive disorders often seek avoidance strategies in the face of learning. A project was tested in order to use their know-how while playing chess and their ability to move on a grid with the help of the digital medium.

The pupils of the regular secondary classes all have an unusual educational path which requires constant adaptations by all the pedagogical, educational, social, medical and administrative teams. Having often experienced academic failure, students with cognitive disorders have little self-confidence and often seek avoidance strategies in the face of learning.

One of the solutions proposed by the pedagogues is to get the pupils to enter into the learning process by relying on their knowledge and highlighting it. In the present case, the objective is to put into perspective the observation of the difficulties of the pupils of the regular classes of the secondary, to use their know-how while playing the game of chess and their capacity to move on a grid with the digital support.

Enter into learning through play

Students suffering from cognitive disorders have difficulty in synthesizing their knowledge in order to reinvest it on a grid support. This leads to the inability to see, perceive a movement work on grid. At the same time, the group of students on which the study is based take part in a chess workshop, some for several years, and have less or little difficulty in locating themselves on this grid support in a situation. game.

This questioning arose from the first chess session when I noticed that the students had a real pleasure to sit in front of the chessboards and to play by applying the movement codes. They carried out, sometimes with several attempts, the adequate displacements and spontaneously used the displacement codes while at the same time most of them were unable to explain the displacements of each piece of the chess game.

In order to confirm this observation, several chessboard exercises were carried out individually. I asked the student to move different pieces in turn, respecting their movement codes. The difficulties regained the upper hand even as these movements were made much more naturally when they were playing.

The didactic objective was to identify the difficulties of the pupils on grids by making a parallel with the activities on chessboards and to make them work on different digital and non-digital spaces. This with the aim of making them aware of their ability to find their bearings on a grid support and of their ability to carry out school activities based on them. These activities aim to help students to feel involved in their learning during work on grids, but also to be able to use the knowledge acquired in other contexts such as carpentry, the plastic arts, to mention than them, without forgetting the goal of becoming better chess players.

The students had the opportunity to use a variety of media on a daily basis and on different levels in order to test different approaches to grid space in connection with the game of chess. For example, board and wall chess boards for learning by handling, the TNI (Interactive Digital Board) with the objective of working the grid of chess vertically, activities in small groups on TNI, tablet or computer in order to not to be alone in the face of the difficulty and to be able to share. Communication then became an objective in its own right and was the consequence of the link that was made around a screen. Finally, the students had access during scheduled sessions, as well as during free time, to computer software in order to practice, play down, communicate, exchange, win, accept to lose, develop strategies individually or in teams, s '' isolate when the need is felt, progress, and learn at your own pace.

Digital as a learning medium

The digital medium allows the teacher to have access to the work, the progress and the difficulties of the pupils without them feeling the omnipresence of the adult gaze. Depending on the software, students can register so that their results can be accessed on the teacher's computer, or a quick glance and more or less distant from the latter makes it possible to make an inventory of the progress of the teacher. the pupil. The prerequisite for adults is to have a good knowledge of the software on which the pupils are working in order to determine, with a simple glance at the screen, the evolution of the pupils who use it.

The crossed objectives between a game of chess and grids with the digital medium were that the pupils be able to locate, reproduce, code, decode the movements of the pieces of the chess game in order to learn to play and to progress in intuitively using the movements, then the combinations which are then popular on a board or digital chess board. The purpose of these activities was to make the pupils aware that the pieces move while respecting a code specific to the game of chess, follow the rules of movement that can be found on a grid. There are codes to follow when reading the grid when playing chess, just like using a grid on paper during a school activity.

The free Matoumatheux software offers various math and logic activities as well as games including chess. Whether students are beginners, intermediate or advanced level, they can learn and progress. 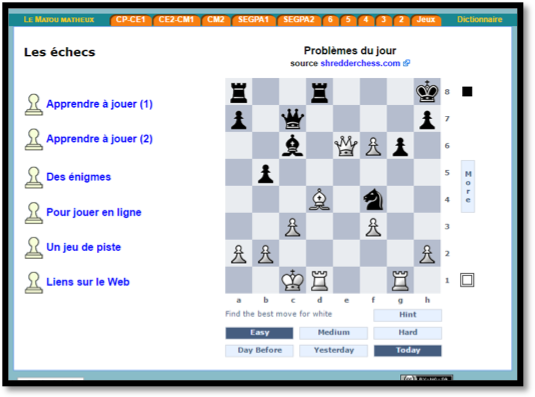 The pupils have the opportunity to work, while playing, on the identification of the coordinates, on the differentiation of squares, lines and nodes, on the vertical, horizontal and oblique symmetries, on the work of moving the pieces on a chessboard (grid ) and on the marking of the axes of symmetry between the pieces in order to better orient themselves in the game.

The software was presented to all the students on the TNI so that they could understand its structure. Regular activities were then offered collectively on the digital board so that everyone could soak up the operation of the software, the organization of activities, requests and objectives. 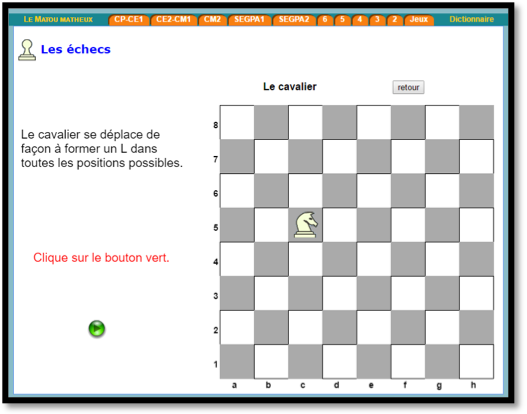 At each session, previous activities were reviewed and commented on. The exchanges between the students during the assessments, as well as at the beginning of the sessions, highlighted the successes, strategies and difficulties that had been overcome. Students should not find themselves stranded during an activity; they asked, if necessary, for the help of a comrade or that of an adult. 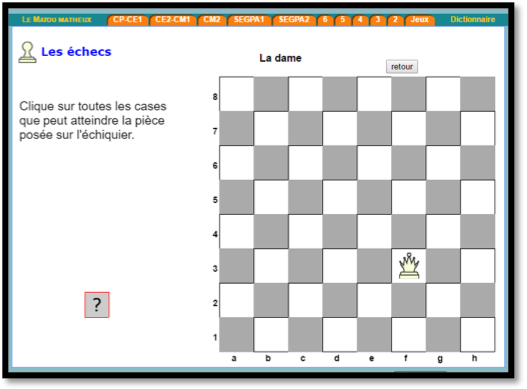 The digital medium offers flexibility in the pace of the activities to be accomplished, allowing each student to get involved according to his or her own abilities. Mutual assistance and tutoring happen naturally; the intervention of the adult gradually disappears in favor of that of the other pupils.

These sessions were based on positive evaluation in order to establish self-confidence as well as a collaborative dynamic in the class and between the students. Each progressed at their own pace without the deadline of an evaluation, a time limit or even institutional pressure. Interactions and mutual aid quickly took over individualism, a recurring consequence of digital screen activities. The students had everything to gain from sharing their knowledge since this pooling offered them the opportunity to learn and understand more quickly.

This confidence building allowed easier and spontaneous verbalization of the activities. The students were able to explain their successes and their difficulties. Over the weeks, they were also able to put forward the unfolding of their strategies in order to succeed in the activities. Meta-cognition was becoming a reality vis-à-vis this project.

The identity of the specialist teacher with pupils with cognitive disorders is to determine the Special Educational Needs of the pupils who, in this case, have difficulties in controlling movements on chessboards and school grids. For that, it is essential to analyze and understand the blocking points and to find solutions adapted to each one in order to overcome these difficulties. The computer tool and the work on the Matoumatheux software are tools adapted to these students and to their way of functioning. 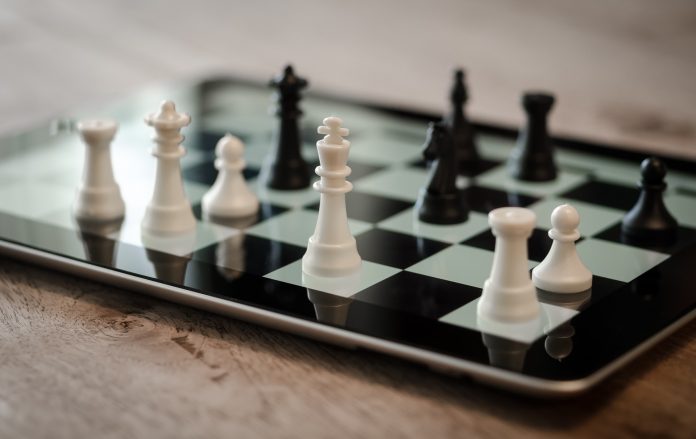 Ethical issues related to the use of digital technology for evaluation