The REFER 2014, seen from the Québec foyer

The very first edition of the Rendez-vous des écoles francophones en network (REFER) took place on March 20 and 21 in various locations, some of whose activities were shared by webcast. Today we come back to the main features of the event.

The very first edition of the Rendez-vous des écoles francophones en network (REFER) took place on March 20 and 21 in various locations, some of whose activities were shared by webcast. Today we come back to the main features of the event.

The idea of this meeting began to germinate in the minds of the initiators, Nathalie Couzon and Monique Lachance, in the summer of 2013. The two women recalled the renewed interest in their profession that they felt following their own participation in events such as Clear, EdCamp and others. Both from the field of languages (one is a French teacher, the other a French educational consultant), they wanted to make it the heart of their event.

They have joined forces with many employees during the fall and winter, so that their project finally comes to life in these first days of spring. A real race against time that has reached its goal! The participants in the Quebec home were delighted, as indicated by the many comments already received: “It was very stimulating for me,” says one. “I was greatly impressed by the container and the content of this first edition of the REFER », Indicates another participant.

The event kicked off Thursday afternoon with a talk by Perine Brotcorne, sociologist, and Laurence Bee, journalist, webcast live from France. Entitled " Parents, digital mutants? Young people: all digital geniuses? », It allowed to launch the reflections in the presence of many high school students who were invited to comment on everything afterwards.

In the evening, a dinner-conference allowed participants to experience a conference of the charismatic Britt-Mari Barth as part of a formula "An almost perfect educational supper" (USPPP for the close friends). Ms. Barth, very open to the reality of teachers here according to many, spoke in particular of the role of the teacher, mediator between the student and knowledge, as well as the importance of interactions for meaningful learning. "She knew how to immerse us in the heart of what we work for every day in our classes", summarizes Brigitte Leonard sure his blog. The formula USPPP, animated dynamically by Corinne Gilbert and Andree Marcotte and broadcast live on the Web, allowed all those who wished to intervene and express their point of view on the spot.

The enriching meetings continued the next morning, with an opening of the day by Ewan McIntosh, educational blogger, former Scotland's first national advisor on learning and technology, and Francophile, who premiered his talk “Personal Computer, Personal Learning? In which he questions the current ways of doing schools in their integration of technology for learning. As always, his lecture was peppered with powerful images and examples that lit flames in the eyes of people in the audience.

After the break, an exchange took place between various stakeholders in the field, on site or in a live webcast from France, who gave their point of view on various issues during “Regards croisés”. Among others, Ron Canuel, President of the Canadian Education Association (ACE), delivered a strong plea in favor of the professional freedom of teachers, asserting that the more constraints are added to them, the more the success of their students tends to be. decrease. "Don't you think we're in good hands?" ”, Then commented the moderator of this portion, Ms. Nancy Brousseau, director of the Federation of Private Educational Institutions (FÉEP).

All these conferences will be online soon on the YouTube channel of the REFER.

Friday afternoon allowed people to meet in workshops on various topics, the choice of which was most difficult! Twitter, leadership, digital ethics, networking, iPads, teacher training and innovation were among the themes discussed in Quebec.

A success across the board

In addition to all this, we were able to attend the awards ceremony of the Twitter literature competition associated with the event, in addition to seeing the results of the Little Red Riding Hood's writing marathon, inter-class telecollaboration project which enabled students from 8 French-speaking classes from 1er elementary cycle to rewrite this classic story… in their own way!

In addition to the 160 participants in the Quebec City home, the activities of the REFER brought together other people in different places, notably at the Collège St-Jean-Vianney in Montreal, at the Commission scolaire des Bois-Francs in the Center. du Québec, at the offices of the Ministère de l'Éducation, du Loisir et du Sport du Québec (MELS) in Montreal, and at other places in the global Francophonie.

We can say that the quality of the conferences, the related educational projects and the workshops presented were able to eclipse the few technical difficulties experienced.

The organizers are now reaching out to find the main locations of the next edition of this meeting which, like the Olympics, aims to travel to different places in order to showcase them. The host of the first edition was the Commission scolaire de la Capitale, supported by its neighbor to the south, the Commission scolaire des Navigateurs. This was made possible thanks to the financial support of organizations such as MELS, CANOPÉ (France), AQUOPS, L'École branchée, FCSQ and numerous sponsors.

In closing, a little quote from Brigitte Léonard, from his blog following his participation in REFER: "It's all well and good to work in a network, but nothing beats hugs, handshakes and conversations with people we admire and whom we meet daily on social networks to consolidate these connections. Hence the importance of multiplying events like the REFER. "

In addition to the many conferences related to areas of learning, the next meetings of the kind to watch, emphasizing similar themes and intended for teachers, are the 32e AQUOPS conference (April 15 to 17 in Quebec) and the EdCamp Quebec (May 16 also in Quebec). From the next school year, Montreal will welcome its 3e EdCamp and we will undoubtedly see a next edition of Clear, in New Brunswick, at the beginning of 2015… (We forgot some? Add them quickly by leaving a comment!) 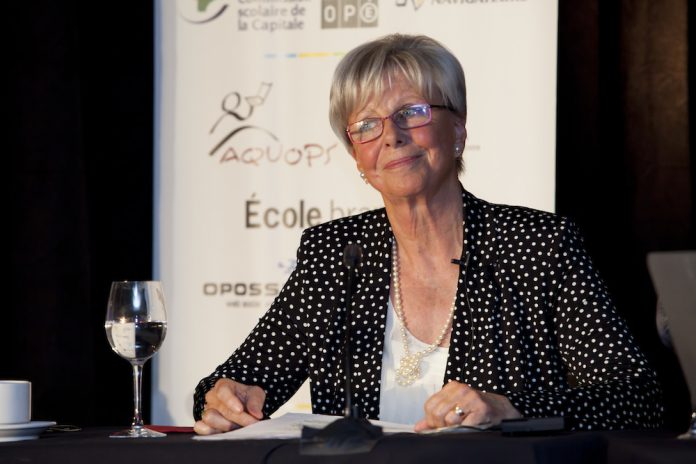