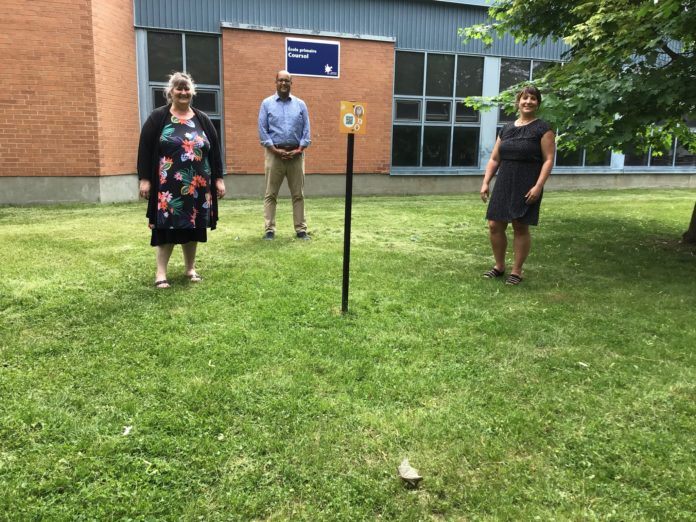 We move thanks to a digital path

Rue Richard, on the grounds of École Coursol, in Laval, a digital path with twenty stations has been built thanks to the good care of thirty students of Marie-Josée Blanchette. Enough to make us want to explore the outdoors!

Rue Richard, on the grounds of École Coursol, in Laval, a digital path with twenty stations has been built thanks to the good care of thirty students of Marie-Josée Blanchette. Enough to make us want to explore the outdoors!

It all started, or almost, with a subsidy of 3,000 $ from the Member of Parliament for Laval-des-Rapides in the National Assembly, Saul Polo. Even before the confirmation of this sum of money, Mrs. Marie-Josée already had her plan in mind: she wanted to carry out a project that moves and is interactive.

"We must open the school to the outside", likes to say the teacher of Coursol School who takes care of children in special education. This project is also part of a commitment made by the school administration, which consists of offering students "two opportunities per year to showcase their achievements to their parents".

In the case of digital trail, it is not only the parents, but the entire community who will have access to the achievements throughout the year. Teachers will also have the opportunity to use it with their students in different subjects.

The course took two weeks to set up. Each of the 20 terminals is illustrated by a drawing of a school child. At each stop, active hikers, equipped with their digital device, can aim at the terminal's QR code. He can then do the suggested physical exercise, whether it be the plank, the punch or even hit the boxing ball. Once the route is over, visitors are invited to take a short survey available on terminal 20… once their breath is taken!

Images, editing, musical choice, interpretation of the characters and production are the result of the work of the teacher's students. The project not only required creativity, but it also called on the knowledge of the students.

Marie-Josée Blanchette explains that the QR code has a versatility that fits perfectly with the digital path. Schools with a website could also set up similar projects, she says since those famous QR codes can be associated with a web address that can display any type of content.

The exercises presented on the trail as part of the activity Let's move! will be available to visitors throughout the summer. Subsequently, given the flexibility of using the famous QR codes, the content associated with each station may change during the 2021-2022 school year. This is how the terminals can be used for other purposes later.

From left to right, the teacher Marie-Josée Blanchette, the member for Laval-des-Rapides, Saul Polo, and the director of École Coursol, Gabrielle Forget. Credit: Courtesy of Coursol School