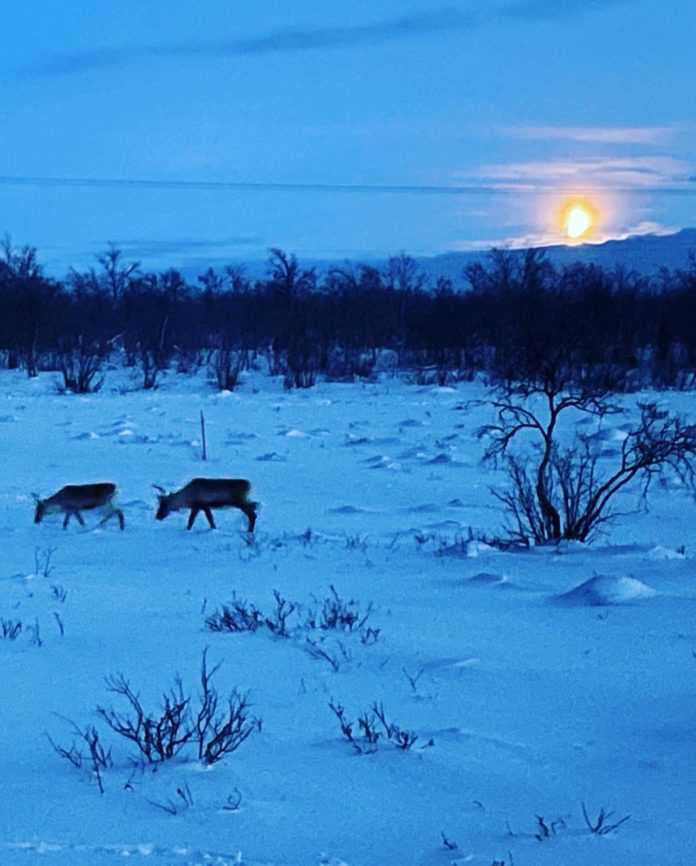 Day 6 of the Quebec - Finland Expedition: the eight Sami seasons

A small new Lappish school, half Finnish, half Sami. Story of an extraordinary school adventure, on the 70th degree of north latitude, 450 km from the Arctic Circle.

Our collaborator Marc-André Girard is on an educational expedition to Finland and document it here!

We come to school Utsjokisuun koulu. It is dark as it has been dark for almost three weeks and it will be dark for more than a month. Indeed, it is polar night, the " kaamos And the sun stays down for about two full months. We are in Utsjoki, the northernmost municipality in Finland, in the middle of Lapland. A river separates Finland from Norway and we are about fifty kilometers from the northeast of Russia. It's the 70e north latitude and we are 450 km north of the Arctic Circle, just 60 km from the Barents Sea.

Utsjoki is both small and grandiose: a small town in itself, but the administrative capital of a county of about 1,400 inhabitants spread over more than 5,000 km2. To give an idea, Utsjoki is almost thirteen times the island of Montreal for 1400 times fewer inhabitants.

That morning, we arrive at school around 8:15 am. The weather is mild: -3 ° C, which is much better than the -30 ° C last week. It seems that we arrived at the right time! It is winter, one of the eight Sami seasons. For this indigenous people of northern Europe, there are indeed eight seasons: the four we know and the transition to next season. The Sami, living very close to nature, they observe changes, when, for example, the winter is not over, but the buds are already growing. At this time when spring and winter intermingle to give way, slowly, to a warmer season. It's the same between spring and summer, summer and fall, and ultimately fall and winter.

Young people arrive at school by bicycle, because the cycle paths are cleared of snow, or on foot, each dragging their big, heavy school bag, an inevitable fate of each student, whether Finnish or Quebecker.

We are greeted by music teacher Perttu Hiltunen, possibly one of the most northerly music specialists in the world! We then meet Pasi Oikarinen, director of the small school of 100 students distributed from kindergarten to 12e year. The school is new because roof insulation defects caused air quality problems and the old building had to close quickly to be rebuilt on the side of a fjeld, a small hill carved out by the passage glacier and indefinitely eroded by the elements. Obviously, the students smelled the good deal and they set up a running slide in a bare space on the hill. They certainly take a good 10 minute climb for a quick descent that leads to a large outdoor ice rink, well maintained by the city.

Today, it is Santa Lucia (or Saint Lucia), a Christian feast which marks the beginning of the Christmas holidays where light is in the spotlight, in this time of eternal twilight. According to the Christian calendar at the time, it would appear that December 13 is the day when the sun begins to set again later than the day before. This is purely traditional, because here the Sun neither sets nor rises earlier or later than the day before. The music begins, a song follows and a young blonde arrives on the stage with a procession of singers. The girl has a crown of candles, a symbol of the festival of light in the countries of northern Europe. Sounding like an incantation, the song will last about ten minutes and the ceremony will end like this, after a procession of Santa Lucia in the great hall. The school day can finally begin.

The school looks like a big house with dozens of small rooms that act as classrooms. Classes are small, barely 40m2, because there are very few students in these classes. In kindergarten, two little ones had fun together while another made gingerbread men in the adjacent room. In the other classes, they were less than ten students. In grade 12, a class was attended by only one student who spends the entire year in private with their teacher. As the principal said with a laugh, “Classes take place as long as there is not less than one student. Otherwise, it's not worth it ”! This house of education is also that of the Finns like that of the Sami, an indigenous people who have lived in Lapland for at least 10,000 years before our era. At school, half of the students are Sami. They are taught the Finnish curriculum in their mother tongue, which is Finland's third official language. Young Finns also choose to learn the Sami language as a third language, after English or Swedish. A ministerial test of mastery of the Sami language exists for graduates and, moreover, during our visit, two students were preparing for it. the sami flag is everywhere and pictures of the vastness of the Lappish nature are displayed everywhere on the walls. It's hard to forget that we are in Lapland, Sami land!

Given the vastness of the territory, the students come from all over the place. Some may take the bus, but the oldest, aged between 16 and 19, can, if they wish and if they come from far away, live in a residence across the street. It is the beginning of the high life for them and it is a practice for those who aspire to continue their studies at the university. The closest is that of Lapland, in Rovaniemi. There is, however, a project for a Sami University in northern Norway, which would specialize in studies related to Sami interests and traditions: tourism, management, forestry, education, etc. Eventually, if this project comes to an end, it will facilitate the university course of a good number of students.

In this large house, all the classes communicate with another class and they have large windows. Flexible furniture furnishes the classes to allow a variation in pedagogical approaches and give the student the choice of his working posture. Moreover, the premises lead Also on small common areas where students can gather. In the school, a small household is located in the same large room which also serves as a cafeteria. Students looking for peace and quiet can use it. The walls are insulated, but the two doors are glazed.

Teachers have multiple subjects on the schedule and they teach in multi-level groups, as is the case with all schools in remote communities no matter where they are in the world. They demonstrate both flexibility and creativity. They can also count on the support of some teaching assistants, in particular some of Sami origin.

Although we are far from the other schools that we visited, the Finnish culture in education is very present: benevolence, warmth, collaboration and mutual assistance, while the atmosphere is family and everyone walks “downhill”. Mutual aid, we have experienced it. After a three hour morning tour, we began our journey back south. Unfortunately, the school exit was cleared too much of the snow and the vehicle's right wheels got stuck in a ditch. In the blink of an eye, ten students came to push us out of our precarious position. Although the car moved, it was the snow plow with his tractor that got us out of this predicament. It seems that we are not the first and that we will not be the last to be caught. Everyone laughed at us heartily and we were able to take the road to continue our educational adventures.

It is quite unusual to drive a car in the dark, in broad daylight. In front, the headlights illuminate the road and allow us to stay on it, even if sometimes the span crosses a lake and it is nothingness left, right and behind. The rearview mirror does not return any image to us. It is probably nothingness ahead too, but the headlights, constantly "on the high" reveal to us the vegetation which is stunted and snowy, as we try to avoid the twenty or so reindeer crossing the icy road or taking it. them too to go elsewhere. This is Lapland!

To track the shipment:

You can also contribute to the financing of the Expedition (until December 22): https://gofund.me/4cafa552

(Editor's note: The École branchée is happy to be a media partner of this expedition! Note that we are not, however, associated with the fundraising campaign.)