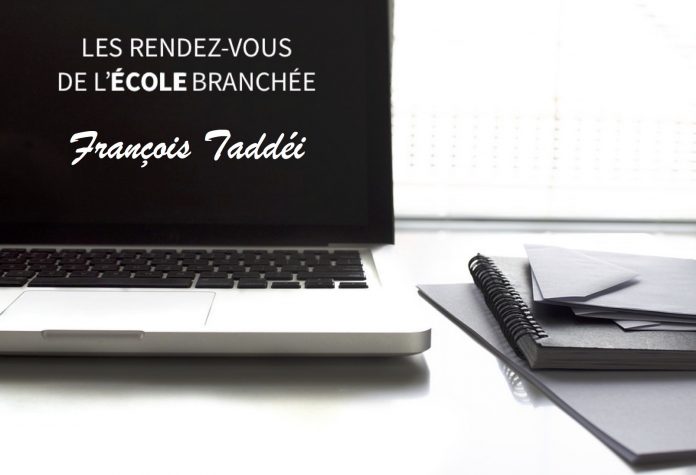 Today we are talking with François Taddéi, director of the Paris Interdisciplinary Research Center (CRI), who talks about innovation in education and 21st century skills.

The “École branchée educational meetings” are podcast interviews with school stakeholders from here and elsewhere. In this episode, our collaborator (and concept designer) Marc-André Girard talks to François Taddéi, director of the interdisciplinary research center (CRI) in Paris.

He is now director of the Interdisciplinary Research Center (CRI) whose mission is to mobilize collective intelligence to co-construct with students, teachers and researchers, new systems adapted to the challenges of the 21st century.e century.

For François Taddéi, "what matters today is not so much to know the solutions of yesterday, but rather to invent those of tomorrow". In his view, young people must be prepared to ask the right questions, to find the resources to move forward and to know how to cooperate.

He wonders whether our schools, created in 19e century, evolve as fast as the rest of society. He is interested in ways to support our children in an ever-changing world.

Among the key skills to be developed at 21e century, he identifies cooperation, creativity and the ability to communicate, but he particularly emphasizes compassion, a quality that machines cannot develop. He also underlines the importance of developing critical thinking in a world where young people have access to a wide range of information and where the risks of manipulation are high.

A vision of the future for France… and for the world!

According to François Taddéi, technologies and social networks have contributed to profoundly transforming the relatively compartmentalized, centralized and hierarchical French education system. It is important to change the educational culture, moving from a system of control to a system of trust. Today, thanks to digital technology, there are many more possibilities to think in terms of professional development, mentoring and peer support.

His dream is to imagine a learning planet, a network that mobilizes all researchers and the entire educational community on a global scale to try to think about the evolutions to come.

(Hit the “Play” button below to start!)

Marc-André Girard
Marc-André Girard holds a bachelor's degree in humanities education (1999), a master's degree in history teaching (2003) and a master's degree in educational management (2013). He is currently a doctoral student in school administration. He specializes in change management in schools as well as in educational leadership. He is also interested in 21st century skills to be developed in education. He holds a managerial position in a public primary school and gives lectures on educational leadership, pedagogical approaches, change in the school environment as well as on the professionalization of teaching. He took part in educational expeditions to France, Finland, Sweden, Denmark and Morocco. In September 2014, he published the book “Le change en milieu scolaire québécois” with Éditions Reynald Goulet and, in 2019, he published a trilogy on the school of the 21st century with the same publisher. He frequently collaborates with L'École branchée on educational issues. He is very involved in everything that surrounds the professional development of teachers and school administrators as well as the integration of ICT in education. In March 2016, he received a CHAPO award from AQUOPS for his overall involvement.
Previous article
Creativity in math: opening closed problems for further study
Next article
Launch of Profhelper