The members of the Quebec Association of Primary-Secondary Computer Users (AQUOPS) gathered from March 31 to April 2 for their 33rd annual conference, a wonderful technopedagogical training opportunity.

The members of the Quebec Association of Primary-Secondary Computer Users (AQUOPS) gathered from March 31 to April 2 for their 33e annual conference, a wonderful opportunity for technopedagogical training.

“Developing the technopedagogical reflex”, the theme of this conference, is becoming a must in contemporary professional teaching practices. The 33e edition of the AQUOPS congress enabled nearly 750 delegates to navigate through a variety of continuing education activities related to the integration of technologies in the classroom. This workshop offer stood out as much for its abundance as its diversity:

Several of these gatherings were summarized by the dynamic “JournalisTIC” team, made up of teaching students from Laval University. We can consult their texts on the Association's website.

In addition to this community of expertise sharing on site, the Twitter thread, through the hashtag #aquops, allowed a few hundred tweeters to disseminate all the impressions of participants to the four corners of the Francophonie.

Still in terms of networking, on the sidelines of AQUOPS, An almost perfect educational dinner (USPPP) will have brought together sixty enthusiastic techno-pedagogues who came to discuss their academic realities and, also, to discuss pedagogical leadership in a friendly and good mood.

In short, the French-speaking technopedagogical planet vibrated to the rhythm of AQUOPS during these three days. Teachers from all spheres of education formed a single professional group. In fact, primary, secondary or adult education teachers from Quebec, French-speaking Canada and even Europe, from the private or public network, met in Quebec City for a 33e both to develop their technopedagogical reflex and above all, their collaborative reflex! 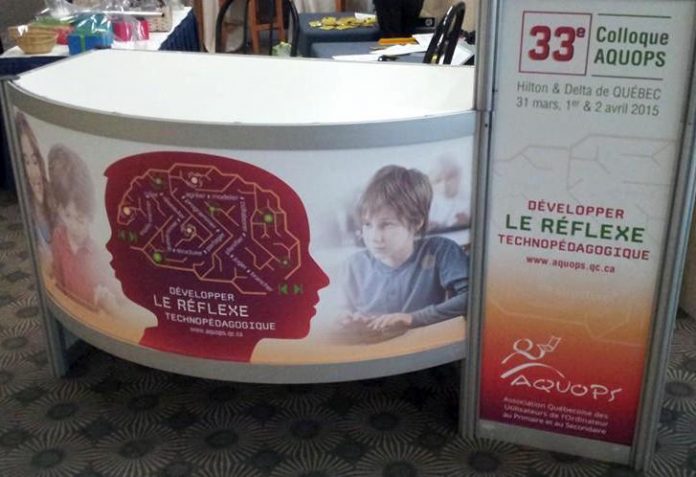