Belgian teacher Quentin Carpentier dared to use the Discord app with his students, starting in 2018! What is Discord? It is an online communication platform, very popular in gaming communities, which tends to become more and more democratized.

Belgian teacher Quentin Carpentier dared to use the Discord app with his students, starting in 2018! What is Discord? It is an online communication platform, very popular in gaming communities, which tends to become more and more democratized.

Quentin Carpentier was in Quebec City for the 40th AQUOPS conference. He took the opportunity to share its experience of pedagogical use of Discord. This software engineer turned teacher was already using this platform in his spare time. After surveying his students, he realized that he was far from being the only one! He then looked for a way to integrate the tool into the life of his class.

When he talks about his experience, many think he solidified it during the pandemic, but that's not the case. He had begun his integration well before, as early as 2018. As a result, he has been able to provide some guidance to colleagues over the past few years.

Discord is an online communication platform. It is very popular in gamer communities who use it to communicate with each other, whether by text, audio call or even video conference (including screen sharing). Available in mobile or computer versions, it allows you to create communication places, called Servers. A server can host members, who discuss together through different channels, each with a specific theme, and who can hold different roles.

Those who are familiar with the principle of Teams or Slack platforms will recognize it quite easily. "The difference is that young people use Discord a lot outside of school hours. This platform is part of their world. I wanted to reach them where they were already, while centralizing information about my courses in one virtual place," says Quentin.

The emergence of a community of autonomous learners

So he created a Discord server dedicated to the school uses of his students, about 80 young people from 15 to 18 years old. Channels were added (e.g. by class, by level, by subject). Rules have been defined (and you have to accept them before you can officially join the community). Roles have been defined and moderators are now identified in the channels. Tasks have been automated thanks to the robot that can be customized in the server (e.g. sending personalized messages, creating assignments).

Exchanges on themes with students, assignment of tasks, deposit of documents, collaborative work, etc. Many possibilities are made possible by "hijacking" the platform. However, for the teacher, the biggest revelation is the emergence of a community of autonomous learners that has resulted.

"There is an instantaneous mutual aid effect that was created in our Server. Kids were asking questions and spontaneously answering each other in the Help channel. They even asked me to have the higher level students retain access to the previous levels' help channels so they could help the younger students. I have graduate students who continue to interact in these channels to help others. I am a spectator to their discussions," says Quentin. He says he always keeps a close eye on the conversations to make sure the information being passed on is accurate and not misleading to students.

He acknowledges that setting up the server was time consuming. However, it engaged the students in a collective project that became useful for their school life later on. They have actively participated in defining life in the community and have taken ownership of it. And when things go wrong (because yes, they did), the consequences are known to the young people (such as exclusion from the server, which deprives the student of a privileged source of information and communication).

"Discord can be misperceived by school leadership. Of course, it won't replace the other more official platforms that have been put in place in recent years, but it can be used to engage young people and make them more autonomous in their learning. Motivation, caring, respect, playfulness, open discussions... these are examples of the benefits," concludes the teacher.

Other uses related to education are also possible. The Math Guilda Belgian school tutoring organization, has just contacted him to set up a Discord server to reach its customers.

The presentation is available here for all.

Have you tried this platform with your students? Share your experience with us. 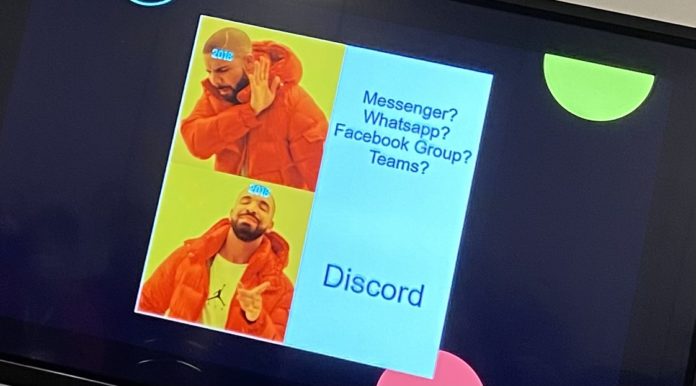 From passive to active students: let's adopt the work plan