Mervill is a royal poodle who acts as a guide dog for his “daddy”, who is both deaf and blind. Together and with the support of the school telecollaboration site Prof-inet, they wish to develop a project combining, among other things, social media education and psychoeducation.

Mervill is a royal poodle who acts as a guide dog for his “daddy”, who is both deaf and blind. Together and with the support of the school telecollaboration site Prof-inet, they wish to develop a project combining, among other things, social media education and psychoeducation.

As part of this interview, I had the joy of chatting directly with Mervill (in addition to being a guide dog, he can write on the computer, brilliant!), Whose comments were validated by his "daddy". », Donald Pinet.

“Dad has always worked with the poor,” Mervill explains to us first. Indeed, Mr. Pinet first worked with children with intellectual and physical disabilities, in contact with whom he developed his own observation grid for inadequate behavior. Later, because of his loss of vision, his intervention shifted to street youth. For 20 years, he has been involved in solving problems arising from conflicts of all kinds: domestic violence, sexual assault, alcoholism, illiteracy, etc. "This step led him to understand this: a conflict arises from a very bad interpretation of an answer", specifies Mervill.

Later, it was on the phone that he offered to help. However, his severe deafness made it difficult and exhausting for him. New alternatives then surfaced, such as Skype, email, Facebook (Mervill has his own account!) And Edmodo.

It is also around this last secure social network platform that the project in preparation revolves. “The Mervill project will begin in January with a 3rd year class from the Commission scolaire de Laval,” explains Ms. Céline Loslier, from Prof-inet. The experiment targets 3 components: educational, relational and social.

Concretely, it is a virtual exchange service with the pupils of a class, which will aim in particular to make young people aware of the importance of hindsight before starting or participating in a conversation on the Web. "Misspelled words, typos, mismatched verbs, and the quality of the content are sometimes confusing," recalls Mervill. In addition, “in a conversation on Social Network, the content changes at the speed of my yelp. It goes fast and hard! Who is not tempted to take like butter a content or a subject found online? "The project will therefore also guide the students in a process of research and validation of content found from a social network, while making them aware of the absence of" non-verbal "codes that allow, in" real "mode , to detect additional information in a conversation. "How can you verify, behind the screen, that the person you are talking to does not have his hands closed with… rage!" Mervill asks.

As a royal poodle, Mervill considers that he has the key role: “I will have some responsibilities: to hold the conversation, to question, to answer, to help, etc. And the greatest challenge will remain to maintain the interest of the student. Donald Pinet (Prof Pinet), for his part, will analyze the conversations, pick up the important things and pass them on to Mervill. He will have the right, on occasion and with the agreement of the group, to intervene to transmit important learning.

A third speaker, really virtual this one, Pépère Pinducket, will be put on occasion to solve a big problem or to explain something difficult. “Pépère, by his very great experience of life, will produce a tale, a story, drawn from the universe of animals. Thus, the affected pupil will find his consolation, his answer, without the others knowing to whom this story is addressed. However, all will also learn a lesson. "

As Pépère Pinducket said: “It's hard to predict the fallout from stormy weather! When the storm has passed, the sun shines in all its glory and the animals are reborn in the forest. Every little action can give hope to someone who seems to have lost confidence. Donald Pinet and Mervill hope to promote mutual aid while having fun. Moreover, with the approach of the Holidays, Pépère Pinducket offers us a Christmas fable!
Click here to download!

Update January 31, 2014: here is a message I received from Mervill!

Woof! Woof! Since January 28, 2014, the Mervill Chien-Guide project has taken off. First day, more than 240 messages between 12:30 p.m. and 2 p.m. It is sport for my paws to answer the various questions of the students. But, fantastic, that is saying so little.

And since then, the students have continued to write to me. I really think everything is going to go wonderfully. As a bonus, Pinducket has yet to participate. He is waiting! 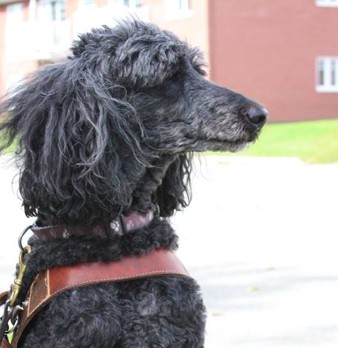