Digital technology, a lever for learning science and technology

The Rendez-vous de l'Île du savoir allowed the discovery of interesting initiatives to promote science and technology in education.

The Rendez-vous de l'Île du savoir, a day of reflection on the role of organizations promoting science and technology in education, enabled us to make great discoveries.

On November 18, 2016, the Rendez-vous de l'Île du savoir was held at the Montréal Planetarium, in partnership with Espace pour la vie.

The program Flashes of Science is of particular interest to primary school teachers. This educational development service offers training, support and free resources that are part of an active process of discovering science.

Introducing the day, Ms. Josée Beaudoin, vice-president of the CEFRIO, presented Major digital trends in education, result of analyzes carried out in collaboration with researchers and lessons from more than 15 years of projects with certain schools.

Here are some data that we retain:

In summary of this introduction, Ms. Beaudoin explains that the trend seems to be towards blended learning. She adds that according to the analyzes, the objective to be targeted would be the creation of activities promoting the development of digital skills in students.

Some pearls and favorites of the day

During the day, many presentations followed one another. Here is a particularly striking idea for each one.

The school in a network from 2002 to today

Ms. Solange Racine, director of Networked School, has explained how technology can help all these small schools far from large centers and allow these isolated students to virtually meet other students of their age.

REÉCIT, a catalyst
Pierre Lachance, educational advisor at the RÉCIT national service for mathematics, science and technology, spoke about Algodoo and the training offered by RÉCIT in the use of this virtual physics laboratory. He also advised the teachers present to have a “digital place” with colorful and dynamic content for their class. Finally, he insisted on the need for the pupils to understand that the error (in an evaluation activity) is only a small one. bug, and he ended by recalling that the main challenge to be faced in digital education remains the continuing training of teachers.

The Fab Lab at school, an incubator for the development of scientific, technological andt industrial among young people
Mathieu Dubreuil-Cousineau, educational advisor in science and technology at the Commission scolaire Marguerite-Bourgeoys (CSMB), presented the network of fab labs, or manufacturing labs, of CS. The concept is inspired by the culture maker and ethics hacker. They are places where spaces, machines, skills and knowledge are shared. The CSMB now has 8 in its schools. The FabLab is moving away from DIY: students must learn to use sophisticated devices. Girls are just as attracted as boys to these Fablabs, which are also open to the community.

Integrate ICT in the teaching of writing from kindergarten? Why not?
Ms. Isabelle Therrien, kindergarten teacher at François-de-Laval school (CS de Montréal), presented the project E-knowledge, interdisciplinary project centered on the use of digital technologies by elementary school students.

Robotics, video capsules and 3D printing at the service of motivation and the acquisition of science in secondary 3
Vincent Ouellet, science teacher at Mont-Royal high school (CSMB), works mainly through project-based pedagogy, long-term projects in which his students produce videos. It uses two studios with green screens and an editing room where students can work after school between 3 p.m. and 6 p.m.

The 360 ° immersive digital theater, a powerful tool for wonder
Sébastien Gauthier, astronomer and producer at the Planetarium, presented the technological marvel that is the digital projector of the new planetarium. “Favoring the sublime over eureka” he says, meaning that wonder is a strong trigger for interest in science.

In the afternoon, three presentations

Preliminary review of the program Flashes of Science
Yves Maufette, president of L'Île du savoir and professor at the Faculty of Sciences of UQÀM, presented some results of a study that surveyed 103 of the thousand teachers who participated in the program. Flashes of science. On average, these teachers carried out eight activities with their students over a period of one to three years.

State of play: science and technology promotion programs and interventions in Montreal schools (preschool, elementary, secondary)
Hélène Mathieu, project manager for acceSciences (concerted action for culture and science education), explained that there are no less than 84 organizations offering educational services to schools related to science. No wonder schools sometimes feel overloaded with the offer. According to acceSciences, digital technology would make it possible to establish a directory where teachers have direct access to the services that meet their needs. To this end, the PRISM website, of the Association for the teaching of science and technology of Quebec (AESTQ), presents itself as "the cornerstone which channels the information of resources".

Educational interventions that promote students' interest in science and technology: results obtained by CRIJEST in the context of community of practice work
Finally, Mr. Patrice Potvin, professor in the didactics department of UQÀM and holder of the Research Chair on the Interest of Young People in Science and Technology (CRIJEST), presented the main lines of a investigation report on this subject published in October 2015.

These presentations preceded interactive round tables where participants were invited to reflect on and discuss the challenges encountered by organizations promoting science in schools in order to propose solutions. 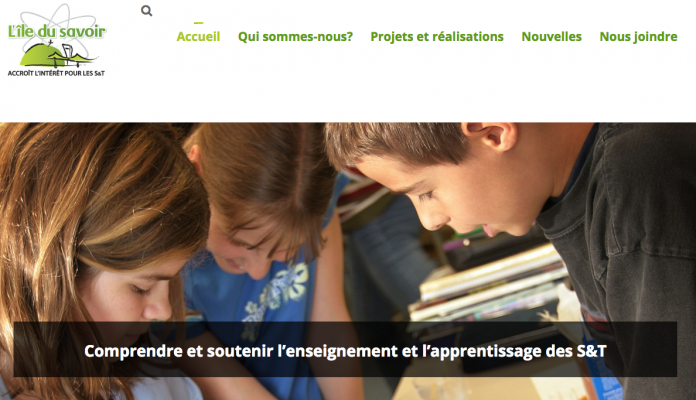