Marie-Claude Simard, a grade 3 teacher at Sainte-Thérèse Elementary School in Val-Alain, challenged her students to grow herbs with the help of technology. Here is the result.

Have you ever grown herbs with the help of technology? That's the challenge Marie-Claude Simard set her students. The Grade 3 teacher at Sainte-Thérèse Elementary School in Val-Alain, Quebec, developed the project Herbs... from technology to the plate which contained several components, including an automated watering system.

Technology is already a part of the landscape at St. Therese Elementary School. All students at the school have access to tablets, and robotics and programming are also a regular part of the curriculum. It was therefore logical that the herb growing project would include a techno component.

The teacher was accompanied by the pedagogical advisor, Sébastien Bergeron, and by two entrepreneurs from the region in carrying out certain steps. The two entrepreneurs even came to the classroom to talk about their entrepreneurial life and their challenges.

From prototyping to automated system

Ms. Simard's project was divided into several parts, so that it lasted almost 6 months. With regard to the technological component, the students began their reflection in January, did research, developed prototypes, analyzed automated watering systems and finally chose to use Micro: bit to realize their system.

The teacher wanted the children to build their own watering system. Of course, the project was coupled with other learning, particularly in science. The students first developed a manual watering system for the herbs, and then a second system that would water them automatically. Then they were able to compare the two systems. "A project like this encourages young people to push themselves and learn new knowledge and life skills," says the teacher.

The watering system designed to analyze the moisture level in the soil and trigger watering when needed. It was necessary to find the right level of moisture and to ensure that the watering was sufficient, without flooding the plants. In addition, the youth had to consider that they are away from school on weekends, but the plants still need water at that time.

One of Marie-Claude's goals was to involve as many of the school's children as possible in the project and there was a lot of collaboration among the students. Initially, grade 3 students took the initiative for the project. Then, students up to grade 6e year joined.

Each student was given different and appropriate tasks, depending on their age and grade level. According to the teacher, "it smelled good in the hallway" as the students grew herbs, such as basil, and this fueled their motivation.

She mentioned that growing a personal garden, which is gaining in popularity, was not necessarily unfamiliar to young people (the school is also located in an agricultural setting). However, the addition of an automated watering system, i.e., the construction and programming of it, gave a little technological touch to the project and, more importantly, set it apart from other projects.

According to the teacher, the biggest benefit of the project is that the students realized what they could accomplish on their own. In addition, a great collaboration with the municipality was established.

Marie-Claude believes that the entrepreneurial spirit, awakened by the project Herbs... from technology to the plate can create endless educational opportunities between the school and local entrepreneurs.

At the 24e edition of OSEntreprendre ChallengeThis project was one of the finalists for the Centre-du-Québec and was even one of the local winners of the 2021-2022 school component. The project received a financial aid of 3 000 $ which will allow its continuation in the next years.

Marie-Claude Simard plans to buy a 3D printer and produce garden identification labels that could be sold in the community. This idea was inspired by a project in a school in her region. 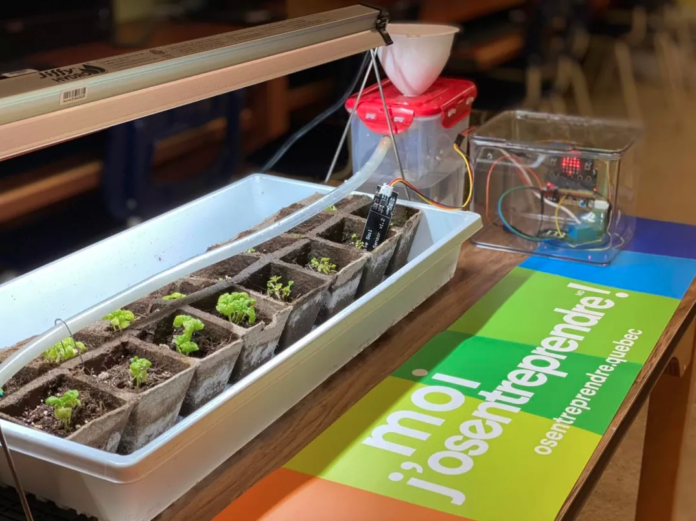