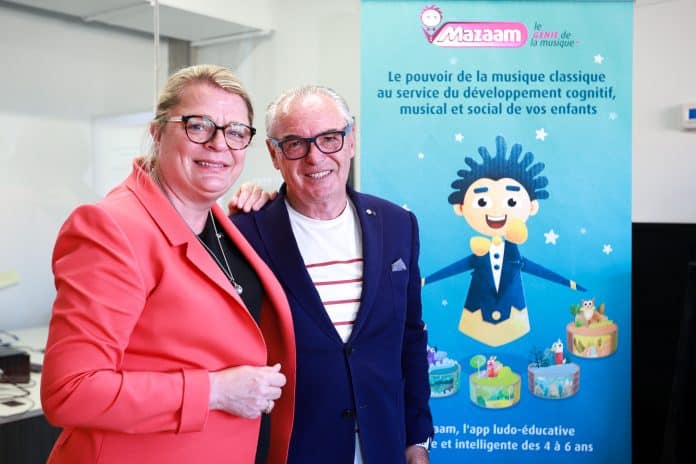 Classical music at the service of child development

Analekta launches the edutainment application Mazaam for tablets and smartphones. Aimed at preschool children, Mazaam is an educational tool adapted to the cognitive and social development of children from 4 to 6 years old in which classical music is at the forefront.

MONTREAL, June 12, 2019 - Analekta is launching the Mazaam edutainment app for tablets and smartphones. Aimed at preschool children, Mazaam is an educational tool adapted to the cognitive and social development of children from 4 to 6 years old in which classical music is at the forefront.

"Mazaam enables the awakening and development of children's listening skills to music and leads them to discover the beauty of musical masterpieces recorded by virtuoso musicians," commented the violinist Angèle Dubeau, porter. word of the project. There is no synthetic music in Mazaam, only real recordings. It is a complete and beneficial musical experience to introduce children to music. Mazaam is a gift for life. "

The series of games featured in Mazaam has been designed to refine auditory perception, improve attention, logical reasoning, abstract thinking, and stimulate auditory memory. Children will become familiar with the pitch of sounds, tempo, timbre, intensity and harmony through the interactive exploration of five playful universes, all at their own pace.

A challenge and a solution

“The musical education of children is gradually being neglected by our institutions and, as Kent Nagano argues in his recent book, classical music could disappear within a generation. There is an urgent need to remedy this deficiency ”affirms François Mario Labbé, president and founder of Analekta and Mazaam Interactive. Angèle Dubeau and I therefore decided to found Mazaam, a company whose goal is to create new means and tools that will facilitate the sharing of the benefits of music to children by transmitting the heritage of classical music. "

In Mazaam, music becomes a learning tool and fully contributes to the multisensory experience (see, touch, listen). The musical works integrated into the application come from the recording catalogs of Analekta, Atma Classique and the Orchester symphonique de Montréal and are performed by the greatest Canadian musicians, including major ensembles such as the Orchester symphonique de Montréal, the National Arts Center Orchestra of Canada, Les Violons du Roy as well as great Canadian soloists such as violinist Angèle Dubeau, pianist Charles Richard-Hamelin and organist Jean-Willy Kunz.

The Mazaam application is based on the research foundations and work of the Canada Research Chair in Music and Learning at Laval University, directed by Professor Jonathan Bolduc. The latter affirms: “On the educational level, nothing has been left to chance. The application supports the musical development of toddlers by offering them challenges adapted to their age. There are short tasks, fun animations, attractive visuals and activities that require parental interaction. "

Equipped with an augmented reality module, the Mazaam application also allows parents and children to play together. The relationship to others is very important in cognitive development. Without interactions, the child cannot learn. In addition, the application does not require special musical knowledge for parents.

Price of the application:

Founded in 1987 by François Mario Labbé, Analekta is the largest classical music record company in Canada and one of the 15 largest independent classical music labels in the world. The company has released over 500 albums, recorded over 200 of the country's top musicians, and won numerous national and international awards.

How to choose an interactive questionnaire to boost your teaching