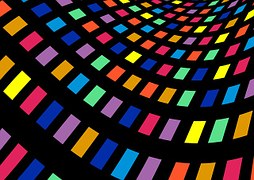 A British artist has just obtained the exclusive right to use a new color: VANTAblack - the blackest black ever created. This "acquisition" sows controversy in the artistic world and brings the concept of intellectual property back to the fore.

“The British artist of Indian origin Anish Kapoor is causing a great controversy today […] revealed by the Daily Mail. He is not the creator, but he has just acquired the exclusive rights to one color, Vantablack, the blackest black in the world. He would have negotiated the exclusive rights to this pigment which has fascinated him for many months. In 2014, he did not hesitate to praise the qualities of this ''super black' to the BBC: ''It's so dark, you hardly can see it. He's got some kind of unreal quality. '' "

“It's supreme black, absolute black, black to dominate them all, deeper than Pierre Soulages' ultra-black, darker than Darth Vader and even more powerful than NASA's Super Black. It is the Vantablack S-VIS, a creation of nanotechnologies whose concentrated name derives from its complete variation combining "black" and "Vertically Aligned Nanotube Arrays", or arrays of nanotubes aligned vertically. "

ACTIVITY 1: What is VANTAblack?

The blackest black is what the manufacturers say. What is it really?

As a team, ask the students to complete the following questionnaire on this new color, its characteristics and its use.

They are invited to use these texts (1, 2) to complete the questionnaire:

ACTIVITY 2: The importance of intellectual property

As a group, ask students what they know about “intellectual property”:

- What is its use?
- Who can benefit?
- Who is used to protect the producer or the consumer?
- How can we obtain “intellectual property”?

Then, as a whole class, watch the next video.

Finally, discuss as a group the relevance of intellectual property in the digital age.

First, ask students if they can explain the difference between a monopoly and intellectual property.

What are the restrictions imposed by both?

Using these articles (1, 2), have students complete this activity which will allow them to better discern the two ideas