Car Free Day was first celebrated in 1997 in the city of La Rochelle in France. At that time, the streets of its downtown area were closed to traffic in order to educate residents about the impacts of the automobile such as air pollution and noise. The following year, several more cities joined in the movement and today around 1,500 cities are organizing awareness activities around September 22.
In Europe, Car Free Day is now part of an event with a longer duration, European Mobility Week.
“In Quebec too, several cities are following suit, in various ways. In some places, the activity is as simple as offering free public transport. Some cities will close a quadrilateral to automobile traffic. Others organize a full week. This is the case of the Quebec pioneer, the Collective and Active Transport Week […] which has included the car-free day since 2004. ”
Source: Saga City
The following activities will provide a better understanding of the different activities offered by cities on International Car Free Day.

At the end of the activities, the student will be able to:
- Consider the issue of transport in metropolitan areas;
- Understand that the involvement of communities contributes to the resolution of planetary problems;
- Discover the activities offered as part of the car-free day;
- Compare travel within two large metropolises;
- Identify measures to facilitate travel in metropolitan areas;
- Analyze an image of the modes of transportation in Montreal and identify the advantages and disadvantages of these;
- Develop an adventure or science fiction story in which cars do not exist.

First, ask the students if they have ever heard of the In Town Without My Car initiative. What do they know about this event? Have they ever taken part - or their parents? If so, in what way (s)?
Now invite the students to discover the various activities organized in various cities in September in order to make the population aware of the challenges of urban transport. Students should not be limited to Car Free Day, but also discover the activities within the framework of awareness weeks.
Students should get into teams of 4 or 5. Then, assign one of the following cities to each team: La Rochelle, Brussels, Paris, Quebec, Montreal,
Students should summarize the activities that take place in their assigned city and present the result to the other students in the class. The following diagram can guide students in their research.

At the end of the activity, ask the students to determine, among the cities studied, which one seems to offer the best awareness-raising activities. Students must justify their opinion.

ACTIVITY 2: Getting around a metropolis

One of the important issues in a metropolis is movement within it.
Invite students to compare the road and transit network in Montreal or Paris with one of the following cities: Cairo, Mexico City, New York or Sydney.

Finally, ask them why it is difficult to travel in some of these metropolises. Ask them to name measures that can be put in place to make it easier to get around these cities.

ACTIVITY 3: Means of transportation in Montreal

First, present the following picture to the students. Analyze this in a large group. What is the title? What does it represent? 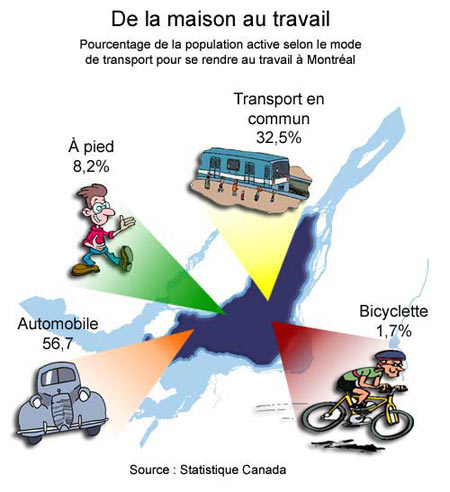 Next, invite students to identify the advantages and disadvantages of each of the modes of transportation shown in the picture.

Now ask the students to imagine that the automobile no longer exists. They have to compose a text in which they indicate why cars are no longer part of our world and how people move in and between cities. They can set their story at any time and even imagine a science fiction scenario.
Have students use word processing software to write their text, and if you have a class website, share the most original creations on it.