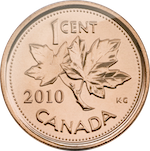 That's it, today officially, the Royal Canadian Mint no longer distributes 1 cent coins. That said, the black piece of steel, copper and nickel will continue to be legal tender as long as it exists.
The day of February 4, 2013, the official start of the end in terms of the relationship between consumers and the coin, was marked by Google Canada which devoted a "doodle" occasionally.
Why did we do this? What will happen to transactions from now on? Is this the first country to do so?
Here are some questions your students will be invited to find answers to.

At the end of the activities, the student will be able to:
- say why the penny is being withdrawn in Canada;
- explain how the transactions will be done now;
- name other countries which no longer have a similar document;
- express their opinion on the matter.

The first activity is to learn about the news by consulting current sources.
Suggestion for Introducing… Show the students a penny and ask them to name different ways of calling it: penny, penny, black "penny", and so on.
You can invite students to consult the following resources. Suggestions: group viewing, reading aloud, personal or small group reading followed by a summary to the rest of the class, etc.
Infographic on the value of the black "penny"
The Press.
Towards the disappearance of the black penny
Radio-Canada.
Phasing out of the penny
Royal Canadian Mint. (in English)
Cent (Canadian coin)
Wikipedia.

Following this, invite the students to demonstrate their understanding by answering the following questions:
- Why is the penny being withdrawn in Canada?
- How will the transactions be done now?
- Are there other countries that no longer have a similar part? If yes, which ones? And since when?

Are other students in the school aware of this news? Particularly if you are in Canada, it is important that everyone educate themselves on the subject in order to be informed consumers.
Suggest that students organize a school-wide communication campaign. They will have to ensure that the information is transmitted in a simple and precise manner.
Ideas: informative posters to put up in the corridors, production of a video capsule broadcast on the Internet, theatrical staging to play at noon, etc.

ACTIVITY 3: What do you think?

As a conclusion, simply have students write an argumentative essay that first summarizes this piece of news, according to their understanding, and then their opinion on the penny withdrawal. Do they think it's a good idea? What are the advantages? Are there any drawbacks? Ask them to justify their arguments.
Alternatively, this activity could be performed orally, either as a whole class or in small groups.

A national symbol - the one cent coin
Technical data on the penny through the years, by the Royal Canadian Mint.