When learning a second language, listening comprehension is probably the most important skill to develop. However, the context is not always favourable and the content is not always adapted to the learners' level. The new Mauril application, which uses audio and video content from Radio-Canada and CBC, offers interesting possibilities. We spoke with two teachers who are using it in different ways.

When learning a second language, listening comprehension is probably the most important skill to develop. However, the context is not always favourable and the content is not always adapted to the learners' level. The new Mauril application, which uses audio and video content from Radio-Canada and CBC, offers interesting possibilities. We spoke with two teachers who are using it in different ways.

It was a happy coincidence that Ann Dontigny, a resource person for the local RÉCIT service at the Centre de services scolaires Au-Cœur-des-Vallées, met Anne Hébert, who is responsible for the Mauril Project at Radio-Canada. After being introduced to Mauril by Anne Hébert, she looked for teachers willing to use it in their classrooms at her CSS. Mauril is a new application, based on audio and video content from Radio-Canada and CBC, to learn or improve English or French.

Last spring, two teachers participated in a pilot project to use Mauril in the classroom. They had the opportunity to provide feedback to improve the platform. While the application is intended for the general public, it certainly offers possibilities for language teaching in schools. It is available for everyone, in web and mobile versions.

Before starting with Mauril, the very first thing to do is to take a knowledge test in the language of your choice (French or English). Based on the user's ranking, audio or video content will be offered. The sequences can be very short for beginners (less than 30 seconds) and longer for the more advanced (more than 30 minutes).

At the end of each listening session, a questionnaire allows the user to validate comprehension and to move on to the next level (or not). The content is taken entirely from Radio-Canada and CBC programming.

To learn English as a second language

Josée Allard, ESL teacher at Louis-Joseph-Papineau School, used Mauril in two different ways with her 3rd grade studentse secondary. She first had a large group listen to a segment on beekeeping. This viewing served as a starting point for a larger project to research this topic on the web. Students were then asked to produce a summary of their learning in a presentation.

Then, during visits to the computer lab, students were able to complete a placement test and listen to content independently. "It was an activity we did for fun. They were calm and focused. They were stimulated by the fact that they could choose topics they liked and the content was always appropriate for their level. I also know they appreciated the instant feedback at the end of each listening session," says the teacher.

She plans to use the app again this year. Since the app is available everywhere, she will be able to encourage her students to complete activities from home as well.

To learn French as a second language

Renée Aubry, a French teacher at Hormisdas-Gamelin High School, uses Mauril in a completely different context. Her students are between 12 and 16 years old and barely know a word of French or even English. She is quick to say that the new application has "changed her life"! She now starts her class periods with 15 minutes of free time on Mauril.

"The content really follows the level of the students. It's such a winner. It's differentiation at its best. It's a type of formative activity that goes outside the traditional framework and can reach everyone," she enthuses.

Another positive point of the application is that the content is entirely Canadian. It allows you to discover everyday words and expressions, in both French and English, while taking into account the diversity of the country. "It's an immersion in our culture. For young people who have just arrived in the country, it is an added value since it contributes to their integration at the same time.

If the teacher had a wish, it would be to eventually have access to a dashboard that would allow her to follow the progress of her students' learning. Who knows, maybe this will be in a future version of the application! 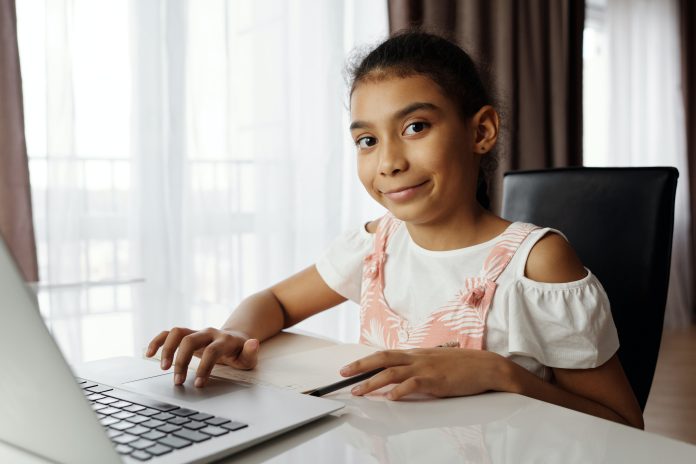