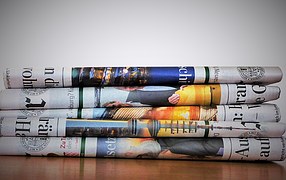 “This year, more than 25 % of news content in Quebec focused on provincial and federal politics. Sport was once again the dominant value. Canadians generated over 71 % sports news. However, the Impact made a spectacular breakthrough by quadrupling its market share. Culture has halted its downfall, international news seems to be starting to climb slowly, and the economy has grown sharply. However, the rest of Canada, seniors, poverty, children and aboriginals remain the media overlooked. On an individual level, the attacks of November 13 in Paris represent the news of the year. Stephen Harper was the most publicized person. "

The following activities will allow students to review the highlights of 2015.

First, as a whole class, name some notable events that happened in 2015. List these events on the board. Invite students to record these events in the following file:

Then ask them to search the website SCOOP! to find out if the subject has been the subject of SCOOP activities! and if applicable, enter the title of the news sheet in the file.

Then ask the students to get together as a team and associate each group with an event not covered by SCOOP! so that they create an activity to discover or deepen the topic assigned to them.

Finally, invite each team to share their creation with the other students in the class so that they can complete the activities created.

Still on the SCOOP! Website, as a whole class, review all the topical subjects that were the subject of fact sheets in 2015. To do this, enter “2015” in the search field in order to have access to the many sheets of the year 2015.

For each card title, ask students to specify which event or topic the card in question refers to.

Finally, take a count of the five most significant topics covered by SCOOP!

Influence Communication offers media monitoring and analysis in Quebec, Canada and 160 countries around the world. Invite students to view their report State of the news - 2015 review and to compose questions that can be used for a quiz in class.

Finally, as a whole class analyze the diagram on the major files of the year offered by Influence Communication. If you have an interactive digital whiteboard in your classroom, use the “annotation” function so that you can annotate the diagram on the board.

First, observe the legend of the diagram and identify the colors of the different folders.

Then compare different files with each other. For example, compare the media coverage of the following sports teams: the Montreal Impact and the Montreal Canadiens.

Also, identify the gray areas that represent the other events of the year 2015 and watch some videos if you like.

As a whole class, name the hot topics that will be followed closely in 2016.
In order to know the news concerning these subjects, create alerts on various news sites such as Radio-Canada. You could mandate a few students to follow different spheres of current affairs for a while, including the following categories: International, national, political, art, sport, etc.