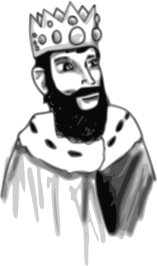 “Although he reigned only two years (1483-1485), Richard III made his mark on English history, as the ultimate king from the royal house of York. He is remembered as a bloodthirsty tyrant, a reputation largely orchestrated by the Tudor dynasty, which succeeded him, and then immortalized in William Shakespeare's play “Richard III”. […] "It is incredible to have found it intact", assures Mathew Morris, who directed the excavations, explaining that work in the Victorian era had passed to one centimeter of the skull of Richard III. […] The '' skeleton n ° 1 '', as it was first named, was found under a parking space with the letter '' R '' from '' reserved '' »

“The remains of King Richard III of England, killed at the Battle of Bosworth in 1485, left the University of Leicester on Sunday for a journey of a few hours through several sites in the region associated with the monarch's tragic end. "

The following activities will help to better understand how this story could have happened.

- Know the highlights of the life of Richard III;
- Know the approach of archaeologists for the identification of the skeleton;
- Understand the importance of genetics.

First, ask students what they know about Richard III, related to the following articles:

Then ask students for their opinion on the fate that history has reserved for Richard III.

After viewing this video, and read this item on the discovery of the Richard III bones, have students complete the following quiz to learn a little more about how scientists were able to discover the identity of the skeleton:

The daily The Telegraph established a simplified family tree to understand the connection between Richard III and Queen Elizabeth II.

Genealogy, and technological and scientific advances, particularly with regard to DNA, make it possible to establish family links between individuals, which would not have been imaginable a few decades ago.

Ask students to establish their family trees to the best of their knowledge, much like the show Who are you? by Ici Radio-Canada.

The Discovery of Richard III
University of Leicester