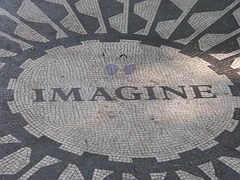 On December 8, 1980 on his way home, John Lennon, former member of The Beatles and iconic singer of an entire generation, was shot at point blank range by a "fan".

“In the fall of 1980, after a luster of retirement, the ex-Beatle returned to music. And fall under the bullets of an unbalanced fan. The assassination of the musician raises a wave of planetary emotion proportional to the madness of Beatlemania fifteen years earlier. "

“John Lennon was 40 years old. We do not understand this assassination and besides who is this Mark David Chapman, this young Texan a little puffy? 25 years old, he is not really part of the Beatles generation. However, he is a fan of the group beyond reason to the point that with him it turns to obsession. And then, in his boundless admiration for Lennon, in particular, there is a “but…”, a stain. An idol cannot, according to him, afford the slightest deviation. […] How did Lennon change the world? It is full of money but it is not the poor who benefit from it. "

The following activities will allow students to learn about the musical group The Beatles and the circumstances of John Lennon's death.

ACTIVITY 1: The Death of John Lennon

As a team, invite the students to complete this the activity in connection with the death of John Lennon. To answer the questions, students can read this item.

As a group, watch this video and answer the questions.

The entire video can be viewed, but it is also possible to skip the section from 4:57 to 7:56 (the part reminiscent of John Lennon's musical career).

As a whole class, ask the students to identify the different albums of The Beatles, the year they were released, and 2 famous songs.

ICT Tip: Students can do a reverse search using the cover image in the Google search bar.

The death of John Lennon, the shock of a generation
Here.Radio-Canada.ca, December 3, 2015