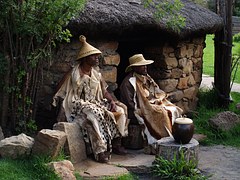 In recent months, people with albinism in Malawi have been victims of an unprecedented wave of brutal attacks. Amnesty International denounces this situation in a report released this week. Let's take a closer look at this sad reality.

“Since November 2014, at least 18 people have been killed and at least five have been abducted and are still missing. It appears that their bones are sold to people practicing traditional medicine in Malawi and Mozambique, who use them in lucky charms and magic potions because they believe they bring good luck and wealth. This ghoulish trade is also fueled by the belief that the bones of people with albinism contain gold. "

The following activities will allow students to discover what albinism is and why people with albinism are persecuted in parts of Africa.

- Know what albinism is and what causes this genetic anomaly;
- Observe images of albinos of different species;
- Understand the situation of people with albinism in Malawi;
- Identify the reasons why albinos are persecuted in Malawi;
- Name the measures taken by the Malawian justice system to counter the wave of violence;
- Reflect on the difficulties of changing the mentalities of African peoples who believe in magic.

First, ask students if they can explain what albinism is. Have they heard of this term before? What do they know about people with albinism? What are the physical characteristics of people with albinism?
To find out, complete this text as a whole class by replacing the different words in the right place:

ACTIVITY 2: The situation of albinos in Malawi

In addition to suffering from impaired vision as well as being more affected by skin cancer, people with albinism face other challenges. Ask students what might be the impacts on the social life of a person with albinism.
Let them know that they can face discrimination and even violence. In some African countries, people are being killed simply because they have albinism.

To learn more about discrimination and violence against people with albinism, invite students to read the Amnesty International press release published this week.

Before reading the press release, write the terms below on the board. They should be able to summarize the information in the accompanying text.

“People with albinism are targeted because parts of their bodies are wanted, with some believing that they have magical powers that bring good luck. "

In order to counter the wave of violence against people with albinism, the justice system in Malawi announced measures to protect albinos a few days ago.

Invite students to read next article in order to know the main measures.

Then ask students the following questions:

- Who is targeting the Mzuzu High Court?
- What measure is it imposed on them?
- What belief do wizards convey?
- What order has the police received regarding the kidnappings of people with albinism?

Finally, invite students to think about why it can be difficult to change the mentalities of African people who believe in magic and therefore persecute albinos.

"Unprecedented wave" of attacks on albinos in Malawi
LaPresse, June 7, 2016