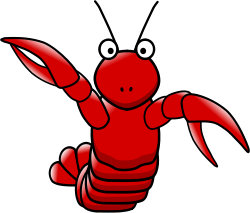 Lobster fishing begins in the Maritimes

The lobster fishing season officially kicks off these days in some maritime regions of Canada. Let us take this opportunity to talk about this important economic activity that is commercial fishing.

“The Atlantic lobster fishery is Canada's most lucrative fishery. Lobster is a high quality, healthy food that is exported all over the world. There are nearly 10,000 licensed lobster fishing companies, which employ nearly 30,000 fishermen in Quebec and Atlantic Canada. "
Source: Fisheries and Oceans Canada
Today, April 29, the fishermen of the Gaspé, northeastern New Brunswick and northern Prince Edward Island begin their lobster fishing season. They will be followed at the end of the week by the Nova Scotians. The fishermen of the Îles-de-la-Madeleine, meanwhile, began on Saturday April 27.
Let's take the opportunity to reactivate some knowledge related to one of Canada's oldest economic activity sectors.

At the end of the activities, the student will be able to:
- Use electronic media to provide information on a topical subject;
- Find information on the Internet;
- Locate and select the relevant information offered on a web page;
- Identify the economic sector to which fishing belongs;
- Know the activities of the primary sector in Canada;
- Understand that fishing is one of the oldest economic activities in the country;
- Identify the major fishing regions in Canada;
- Identify the large areas where lobster is fished in particular;
- Prepare, as a team, an oral presentation integrating computer elements of their choice;
- Name the challenges faced by commercial fishermen;
- Realize the importance of lobster for the inhabitants of maritime regions.

The first activity is to learn about the news by consulting current sources.
To read :
Lobster fishing in the Magdalen Islands begins
The Press. The 138th lobster fishing season was launched on Saturday morning in the Magdalen Islands.
A new lobster fishing season begins in the Maritimes
Radio-Canada. Anglers in northeastern New Brunswick and northern Prince Edward Island begin their fishing season on Monday
A 7 kg lobster at the Biodôme
The Press. Goliath, the seven-kilo lobster that was on sale at the IGA supermarket in Varennes, no longer has to worry about being soaked in garlic butter before being devoured. He now lives at the Montreal Biodome where visitors can observe him.

Here are some questions students should be able to answer before continuing.
- What sector of economic activity is fishing?
- What other activities are included in this sector?
- How long have we been fishing in Canada?
- What are the major fishing regions in Canada?
- Where do we fish for lobster?
Provide these few sources so that students can respond quickly if you are short on time. They will nonetheless develop their ability to locate and select relevant information.
Wikipedia: Economy of Canada
http://fr.wikipedia.org/wiki/%C3%89conomie_du_Canada#P.C3.AAche
Fishing regions in Canada
http://www.dfo-mpo.gc.ca/regions-fra.htm
Lobster fishing area maps
http://www.glf.dfo-mpo.gc.ca/Golfe/Cartes-des-zones-de-peches/Homard

Some questions / challenges for your students!
- How important is lobster for the inhabitants of maritime regions?
- What are the challenges facing fishermen?
Ask the teams to prepare a short presentation of 5 to 10 minutes which will be supported by the use of the computer. They can prepare a PowerPoint presentation, a Prezi, a video capsule, a presentation in tebeiciel (if you have a TBI), or even in an application for iPad… It's up to them! They must demonstrate judicious and appropriate use.
Don't forget to suggest that the teams summarize their findings in a few words that you will publish on the class blog!

Nature makes strong children, send them outside to play!