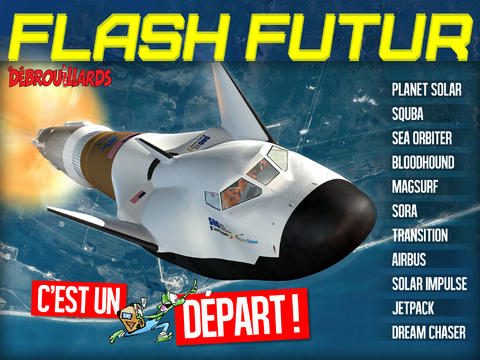 The science magazine for 8 to 14 year-olds has recently offered an interactive digital book for Apple tablets, entitled "Flash Futur: It's a start!" »It presents 11 astonishing vehicles, like the monthly column of the same name.

The science magazine for 8 to 14 year olds recently launched an interactive digital book for Apple tablets, entitled Flash Futur: It's a start! It presents 11 amazing vehicles, like the monthly column of the same name.

Flying skateboard, submarine car, supersonic car, solar boat, comfortable airbus… These are some of the 11 vehicles or prototypes of the future presented in the application.

“Throughout the journey, inventors passionately recount what inspires them to create these strange and spectacular vehicles. On arrival, we test our new knowledge thanks to a quiz, we send a postcard from the future to our friends, we do a personality test ... Beppo, the famous mascot of Les Débrouillards as well as the character of Van the inventor are they too are on the journey ”, we can read in the launch press release.

" The Chronicle Flash Future remains, year after year, one of the favorites of our readers according to our large annual survey. It just goes to show that imagining the future is at the heart of the interests of the young generation! », Explains Isabelle Vaillancourt, editor-in-chief of the magazine. This explains the choice of the theme for this first application of Les Débrouillards, which will not be the last. Indeed, Ms. Vaillancourt tells us that three others are currently in preparation. “We are preparing two with the most popular experiences. The youngster will not only be able to carry out the experiments, but also have Yannick, our experiment designer, do all kinds of crazy experiments. In addition, in the series Future flash, the subject of the next application will be the home of the future. "

Flash Futur: It's a start!, priced at 4.99 $ on the App Store, offers clear, concise text and spectacular photos. In addition, many videos animate the discovery. The environment of this application is secure and without commercial solicitation. The 14 outgoing links are clearly identified by a specific logo and lead to scientific videos, with no suggestions for further viewing afterwards.