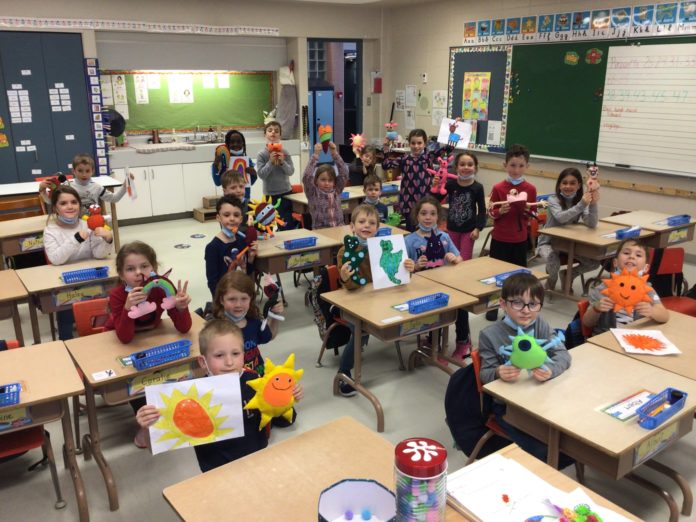 Cuddly toys imagined by children and made by adults

Secondary 5 students from Les Etchemins secondary school made stuffed animals that had been drawn by Grade 1 students from Plein-Soleil school. A project that aroused pride on both sides.

Grade 1 students in Mrs. Sylvie Bard's class, from Plein-Soleil school in the Center de services scolaire des Navigateurs, received a very special delivery a few weeks ago. Last fall, they sketched out a pooch they'd like to own. And now, they were holding their stuffed animal in their hands, made by secondary 5 students from Les Etchemins secondary school (ESLE), from the same CSS.

“It's been a few years since I saw a similar project. I was waiting for the right moment to do it with students. This year, the context was favourable”, explains Claudia Morin-Bégin, visual arts teacher at ESLE. It was her 27 students from the PRO 21 program, creative component, who had the honor of making the stuffed animals and learning to sew at the same time.

Claudia knew Sylvie Bard, a Grade 1 teacher, through her mother; she therefore spontaneously proposed the project to him last fall. “After 30 years of teaching, it was a refreshing project that presented itself to me,” says the teacher. During a session, she first introduced various stuffed animals to her students and told them about the creative process behind the final product. Then, she guided her little students in drawing their future doggie. “There had to be details, but not too many. The students were able to exercise their motor skills. »

The drawings were then given to Claudia's students. They already had the opportunity to familiarize themselves with different stitches beforehand and to sew a small cushion. From the drawing, they first prepared a pattern with the different parts needed, then cut them out of felt in the colors of the drawings. The sewing stage then began. In all, 8 periods were devoted to the project and some students also brought their creation home to refine it.

“My students were very motivated by this project. For them, it was concrete and motivating. They were making a stuffed animal for a child in their region,” says Claudia.

It was finally in mid-February that Sylvie's students received their stuffed animal, along with their original drawing and the designer's name. “Their smile was beautiful to see. It made them proud. »

It was a first experience for the two teachers. They do not close the door to repeat it next year. And who knows, their project may inspire other plastic arts teachers who decide to introduce their students to sewing, while offering an original creation to little ones!

All images in this article are courtesy of CSS Browsers. Check out more images on the Facebook post.

Robotics: Drawing inspiration from the Perseverance rover to stimulate creativity and engagement

Fablab Onaki opens up a world of possibilities for indigenous youth