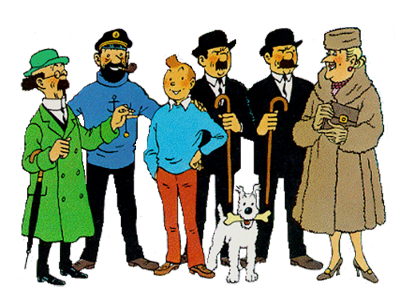 The City of Winnipeg Library System recently decided to get rid of Tintin in America because he considers this album racist.

In Winnipeg, Manitoba, it's not just in libraries that comics risk censorship.

“Residents of the Manitoba capital asked a Chapters bookstore a few days ago to end the sale of the book, which they believe is racist against First Nations.
The complainants believe that the book, released in the early 1930s, conveys a pejorative vision of the Aboriginals, who are called "Redskins" by Hergé, the creator of the adventures of Tintin, who died in 1983. "

Let's see why this event once again raises questions about freedom of expression.

- Understand why people in Winnipeg are asking for the comic strip to be removed Tintin in America Chapters Libraries and Bookstore;
- Be aware of the existence of racial tensions in Winnipeg;
- Consider the censorship of Hergé's works;
- Identify different albums The Adventures of Tintin;
- Explain the historical, political and social context in connection with a censored album by Hergé;
- Find and analyze a text that contains stereotypes.

ACTIVITY 1: The situation in Winnipeg

First, ask the students if they are aware of the censorship regarding the album. Tintin in America. What do they know about this event? Where does this censorship take place?

Invite students to view the following report in order to understand what happened recently in Winnipeg.

Then ask the students the following questions:

Finally, ask students why they think this censorship of Tintin in America takes place in Winnipeg. To get a feel for it, have them locate the city of Winnipeg in Manitoba and then read next article which explains the racial tensions in this region.

ACTIVITY 2: Censorship and freedom of expression

As a whole class, try to answer the following question posed by the columnist: "Should it be for all that to prohibit the reading of all the works with ambiguous contents published at other times on the pretext that certain groups are represented in an unacceptable way?" according to today's criteria? "

Then discuss the different measures taken to limit the reading of different adventures of Tintin. For each of the three measures presented in the article, invite students to share their opinion on the need and impact of these actions.

The album Tintin in America is not the only work of the famous cartoonist Hergé to know the censorship.

First, ask students if they can name other albums in the series. The Adventures of Tintin created by Hergé.

As a whole class, identify various adventures of Tintin using the file below:

Among these comics presented, some are considered to convey a stereotypical image of certain ethnic or religious groups. As a whole class, identify these works.

Then, individually or in teams, the students will have to choose one of Hergé's works that is the subject of censorship and carry out research in the library or on the Web in order to understand the reasons for it. Ask students to compose a text that explains the historical, political and social context of the creation of the work and which presents the various criticisms leveled at it.

Suggest that students analyze a text that contains stereotypes. First, ask them to explain what a stereotype is.

Then, as a team, ask them to find a text on the web that contains stereotypes. They should print it out, note its source at the top of the page, and then highlight stereotypical elements in the text.

Finally, as a whole class, discuss the different stereotypes identified and try to reformulate the information in order to correct it.

The Adventures of Tintin
Wikipedia article