Being a teacher is "the most beautiful job in the world", many people who practice it will tell you without hesitation. It is a demanding profession, with its share of pain, joy and unforgettable experiences. For many, it would have been impossible to choose another career path. However, and the observation is the same whether you are in Belgium or in Quebec, the profession suffers from a deep devaluation, which even drives away future candidates.

This article was co-authored with Laurent Di Pasquale as part of a partnership with theEduLAB.

Being a teacher is "the most beautiful job in the world", many people who practice it will tell you without hesitation. It is a demanding profession, with its share of pain, joy and unforgettable experiences. For many, it would have been impossible to choose another career path.

However, and the observation is the same whether you are in Belgium or Quebec, the profession suffers from a profound devaluation, which even drives away future candidates. With increasingly difficult working conditions, the instability of first jobs and the precariousness of annual contracts, the profession has a bad reputation (rightly or wrongly).

In Belgium, for example, one in five teachers leaves teaching within the first five years. According to a study conducted by the University of Mons in 2020-2021, as many as 34 % in Belgium had thought of leaving the profession.

In Quebec, the statistics are a cut and paste. The situation is the same. Add to this the fact that the Centre de recherche interuniversitaire sur la formation et la profession enseignante (CRIFPE) estimates that 40 % of Quebec teachers will gradually leave their profession for retirement by 2030. Will the next generation of teachers be there despite the lack of recognition of the profession?

However, in Belgium and Quebec, there are examples of initiatives aimed at enhancing the value of the profession, counter-examples that are strikingly positive! In this text, we offer you our analysis to show you that yes, the teaching profession can be valued in many ways!

1) The valorization of education through official channels

Belgium is a small country, but with a multitude of official actors (sometimes too many!). This can be a constraint for many subjects, but on the contrary it is a good opportunity for teachers to be valued in various ways.

Thus, let us note first of all the projects " Digital School "of the Walloon region. The objective of this program is to equip schools and provide them with digital material for students every year, based on the project of one or more teachers. Regularly, the different projects and the teachers who carry them are highlighted through Facebook page and the Digital School Project website.

This valorization reaches its peak during a well-known event in Belgium: Ludovia (a concept coming straight to us of our French friends). During these three days, which take place at the beginning of November, different teachers with projects in their classes have the opportunity to come and exchange and present their achievements to their colleagues from all over Wallonia (but also from France, Switzerland, and sometimes much further away!).

The Wallonia-Brussels Federation is for its part the largest organizing power for education in Belgium. And it also participates in the effort of valorization through his Facebook pagebut also via its E-Classroom platform, where it also promotes many teachers and educational practices.

Finally, various contests and awards allow teachers to showcase the positive actions they have accomplished. Every year, for example, the Queen Paola Prize awards various educational projects and their teachers, who have shown themselves to be particularly creative and effective in dealing with complex situations.

In Quebec, the Ministry of Education (MEQ) is implementing various initiatives aimed at promotion of the teaching professionThis is a great way to get to know the people who work in the field, such as Teachers' Week, which takes place in February of each year. A Strategy for Valuing School Personnel was also published in 2022. "Acting on the valorization of school personnel will ultimately contribute to fostering staff retention, strengthening their commitment and mobilization, and making careers in education more attractive," the MEQ states in the introduction.

With this strategy, the ministry is planning several measures that should allow the profession to shine more brightly and support teachers in their daily work. For example, a reference framework for the professional integration of teachers, support for the professional development of school personnel and the establishment of an annual Day for the Valorization of School Personnel. As the strategy is relatively new, it remains to be seen how it will be implemented.

Furthermore, Order of Excellence in Educationcreated in 2018, allows the Quebec government to recognize the merits of certain actors in the field of education and higher education in Quebec each year.

The unions representing teachers in Quebec have also been behind a number of initiatives to raise awareness, such as the series of videos Teacher's life which presents funny scenes from the professional life of teachers and their repercussions on their personal life. It is essentially a public relations operation to show the working conditions of teachers.

2) To be valued by one's environment

In Quebec, the promotion of teaching comes mainly from the various groups that offer showcases to those who implement promising or innovative projects in their classrooms. During annual conferences and symposiums, teachers can submit proposals for conferences and workshops. They then have the opportunity to present their projects, share their learning and inspire other teachers to do the same.

Also, let's remember that École branchée is a media entirely dedicated to education whose mission includes, among other things, the promotion of positive experiences of teachers in the digital age.

Finally, there are various communities of practice that allow Quebec teachers to exchange with each other and to grow professionally. This is notably the case with theNetworked school which offers several activities and communities of practice that culminate in the annual knowledge transfer event. Another example is the entrepreneurial classes that come together to celebrate at the annualIDEAfor example. In the same spirit, in Belgium, initiatives such as the learning community (eduLAB and UMONS) allow teachers from different backgrounds to share their practices on a regular basis and online.

On the other hand, despite these opportunities to publicize their projects, many teachers are still reluctant to step outside the classroom. Perhaps some contexts are less conducive than others to encouraging teachers who step out of the box to showcase their achievements. However, we believe that every opportunity is a good one to showcase your accomplishments!

In Belgium, the same observation can be made: although teachers often do beautiful things and class projects that deserve to be known, it is clear that (too) few have the desire to make them known. Wouldn't it first be necessary to take a more positive approach to criticism of one's own teaching actions and to be open to improvement and comments from one's peers?

Thus, there will be no lack of opportunities to positively present one's ideas for activities and achievements.

To be valued in one's environment sometimes takes time, and a lot of energy. Sometimes the saying "no man is a prophet in his own country" is still true, but you have to persevere to contradict it!

3) Turn to social networks to fill the gap?

In order to value the teaching profession in a different way, more and more teachers (like Laurent, the co-author of these lines!) are turning to social networks to make their work known. What a pleasure to be (finally) listened to, to have a positive and constructive feedback on what we do and to build a network of collaborators by the same token!

When Laurent started on social networks with his page Ed.Tech: ICT and new pedagogical practicesHis goal was to compile various tips and resources that he felt would be useful to his colleagues. Since then, it has really served as a sounding board for him to express himself!

In Belgium, he is not the only one. So, here is a small list of teachers that we warmly recommend you to follow in order to benefit from advice, resources, and a great dose of pedagogical creativity!

All of them have one thing in common: the immense desire to share and help their colleagues (direct or indirect). And what if the secret of valorization was there? To have the desire to help and positively advance the teaching community with a capital E? Here, everyone has found a way to value their work and to transmit their passion for teaching to others.

4) Teachers' use of digital technology to build communities

If we look closely at the profile of the teachers mentioned above, almost all of them have this same point in common: the use of digital technology in their classrooms. Is this an obligation in order to be valued in the teaching profession? Not necessarily.

Digital technology is only a tool at our disposal, it must be remembered, to carry out very human actions. Thus, it is above all their values, their commitment and their desires that will sooner or later allow teachers to be more valued in their function. The use of digital technology as a means of communication opens up new frontiers to shine outside the usual networks.

Thus, and on a global scale, the latest winners of the " Global Teacher Prize "were first and foremost teachers who were resilient in their profession to get students to progress (with or without digital).

However, let's not hide it: mastering digital tools and developing innovative projects allows some teachers to shine more quickly. And you, do you want to shine or make your colleagues shine? What are the means implemented in your environments or on which you can act to enhance the profession and thus reverse the spiral of demobilization that is felt at the moment? Share them with us: info@ecolebranchee.com

In closing, we hope that you have had as much pleasure as we have in discovering these differences between European and Quebec practices. 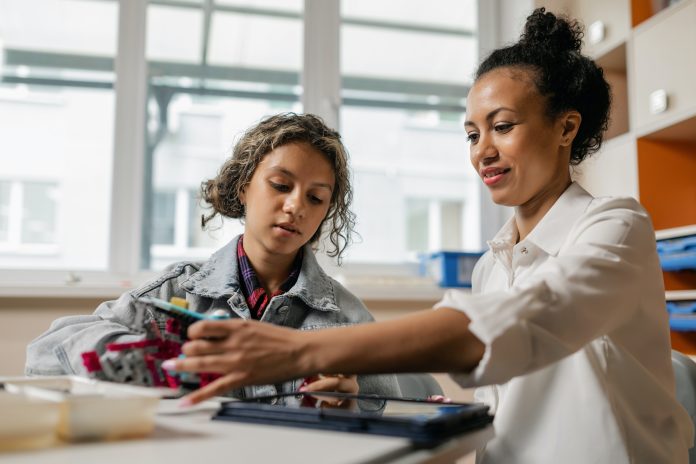