The Montreal School of First Letters makes digital literacy and programming central elements of its educational project. From kindergarten to grade 6.

The School of First Letters (EPL) has not stopped surprising us. Recently we were talking about one of her students, Emily Fetco and her app Avoid Infection. This is perhaps no coincidence when we know that this school in the Plateau Mont-Royal in Montreal makes digital literacy and programming central elements of its educational project. And this, from kindergarten to 6e year.

The adventure began three years ago. Amalia Nanu, technopedagogue, and Marie-Pier Cournoyer, general director of the school, have developed a digital literacy program with the help of teachers. Focusing mainly on programming, the educators got involved in the initiative, convinced of its merits. The additional acquisition in 2020 of small intelligent robots (Ozobot) ensured the sustainability of a project reconciling academic content with technological skills. Indeed, as Amalia Nanu points out, “children don't just have fun with robots, they also take the opportunity to learn the subjects on the program. "

For the CEO of The School of First Letters (EPL), the flexibility of such a learning project presents an unavoidable potential in the acquisition of transversal skills of the 21e century.

Combining creativity and educational content, Louis-Philippe Merlini, grade 3 teacher, challenged his students to build a course that would take Ozobot to travel through an Iroquoian village. For science class, young neophytes had to recognize and reconstruct constellations, which Ozobot then had to walk through.

For her part, Sandrine Labalte, teacher of the 4e year, bridges the gap between programming and mathematics. The teacher put the robot to the test during activities that included angles and problem solving, among other things. Smart kids can also program Ozobot to draw, subsequently comparing their initial work to that resulting from the little robot. Visually, it is a formative and just as fun activity.

By familiarizing themselves with the robot and its encoding, regardless of their level of schooling, young learners concretize concepts such as angles and the development of solids, while reinforcing their achievements.

Learning to program occurs gradually and sequentially. In toddlers for example, the robot embodies a mouse (with control buttons on the back) moving on a mat using the instructions given by the child. The goal for young students is to guide the robot to the letter designated by the teacher. This is a beneficial activity for memory, orientation and location in space, reading (letter recognition), as well as mathematics (calculating the number of boxes and sequences that the robot must go through. ).

According to Amalia Nanu, “the feeling of failure is less when the activity is fun”. Children are therefore invited to experiment, to make trial and error, like budding scientists. "They therefore want to succeed," continues the specialist.

According to other teachers, including Sophie Bouchard, this desire to succeed is also noticeable among students. Like his colleagues, the integration of programming into his teaching was a first. The use of Ozobot robots for the creation of a clock allowed to visualize the notion of time, generally representing a challenge of comprehension in toddlers.

What's more, according to the teacher, the assessments create less stress for students, who feel more like they are taking on a challenge rather than taking an exam. According to the teachers contacted, the little Ozobots are also a great way to practice collaboration, teamwork and problem solving.

After three years of existence, the project should maintain its growth if one relies on the benefits since its inception. One thing seems certain for the different actors of the EPL: digital literacy has been established immutably in the new house of R2-D2!

Read also : our article on the project of young Emily Fetco.

Discover the training First steps with Ozobot on Campus RÉCIT.

Are you interested in robotics and programming? You can also receive our email alert to be informed by our virtual educational advisor each time we publish articles on these topics! 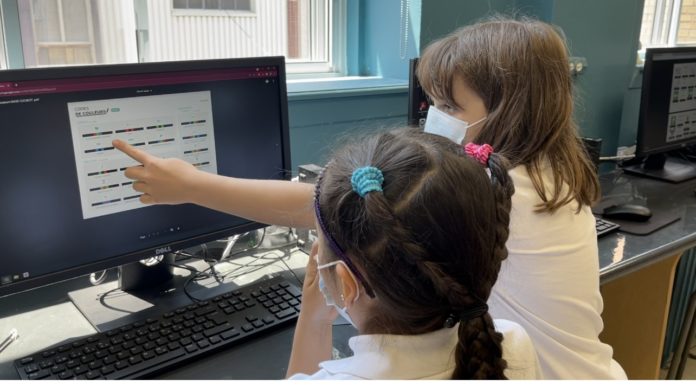 3 recommendations for the pedagogical use of computer programming in Quebec