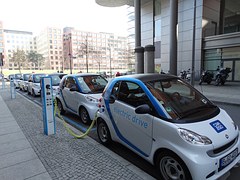 In Norway, almost one in five cars sold is fully electric. This is a unique situation in the world.

“Free parking and chargers, reserved lanes, exemption from tolls on bridges and highways… You only need to drive a few minutes through the streets of Oslo to understand why the Norwegian capital is considered an electric car paradise.”

The following activities will help to better understand the advantages of this mode of transport.

Then, in order to understand why Oslo received this designation, invite students to read next article.

Then ask the following questions:

Ask students if they can name other forms of transportation that run on electricity or other types of green energy.

Recently, the Government of Quebec announced an electric shift for cars by wanting to see 100,000 electric vehicles on the roads within 5 years.

Have students search the web for information about this ad. They should then be able to explain how the government plans to go about achieving that goal.

Quebecers are the pioneers in Canada for the electric car
La Presse, September 13, 2015