An issue on triangulation of evaluation

(V25N2) The student reveals himself or herself through learning traces

Not yet a subscriber?

Word from the editor

Learn and leave your mark

There are many ways for young people to demonstrate their learning. Sometimes by allowing them to step outside the box and be creative, they can surprise us in a fun way. For example, some will excel at writing, others at speaking and some will want to create a model with their own hands.

Fortunately, the opportunities for students to demonstrate their skills have never been greater (with digital technology adding to the traditional arsenal). Beyond the paper-and-pencil exam, they can express what they have retained and understood about a notion through various productions: oral report, video clip, schematic illustration, written production, etc.

All the learning traces they leave during the school year allow us to establish an accurate picture of their abilities and to determine the level of achievement of the planned learning targets, based on concrete elements.

"A trace, or evidence of learning, is a demonstration of what the student knows, can do, and/or can express."

To this end, schools are increasingly interested in the concept of triangulating evidence of learning. This involves the teacher collecting evidence of student learning from three different sources: oral expression (including conversations), observation of attitudes and behaviours, and productions (written or otherwise). The teacher can then consider the sum of this evidence to determine the final grade for his or her students.

This issue proposes ways to initiate, simplify or enrich a process of collecting student learning traces. It discusses effective integration into practices practices, collecting, organizing and evaluating the traces, and finally providing feedback on them. Concrete examples are presented, including the virtual school of the Conseil scolaire acadien provincial in Nova Scotia. in Nova Scotia, and useful tools are suggested (on this subject, do not miss the central pages).

It's not about changing everything overnight, but about taking a step further to let students make their mark.

What did you think of this issue?

Take a short survey for a chance to win 50 $ to spend on LesLibraires.ca.

Get your professional reading badge 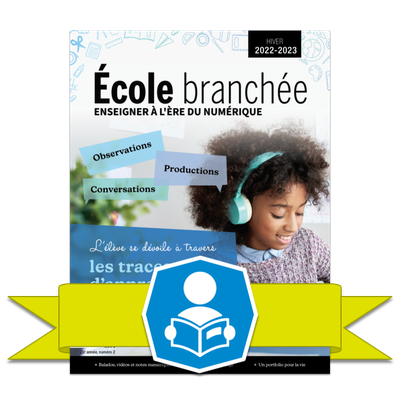 Add it to your professional portfolio as evidence of your commitment to continuing education!
Powered by CADRE21.
Request your badge >

One of the best ways to document student progress is to collect learning records. Whether we call them traces or evidence of learning, they allow us to verify the achievement of objectives and to obtain a portrait of the skills and abilities developed over time. The more numerous and varied the traces, the more complete the picture will be.
Read the article

The Conseil scolaire acadien provincial, which includes Nova Scotia's 22 French-language schools, has offered a virtual school since 2012. This allows for more course choices for students in grades 11 and 12. All courses in the Virtual School are available to students in all schools. At the Virtual School at CSAP, students progress through their academic journey independently. Teachers periodically collect learning records through triangulation to ensure that objectives are being met. An incursion into the reflections behind the practices put in place.
Read the article

In 2021-2022, Coeur-Soleil School piloted the digital portfolio with two grade levels, preschool and grade 3. Resource teacher Caroline Labbé was granted release time as part of a project submitted to the Quebec Ministry of Education, which allowed her to prepare the basic model, facilitate the first three periods of the project in class, and be present and available for the teachers involved.
Read the article

Error as a Teaching Tool: What is EVALUATION?

Over 90 % of students in a classroom are video game enthusiasts (Toppo, 2015), who are therefore accustomed to persevering through increasingly complex levels. Even more so, younger teachers are more likely to understand the mechanics associated with video games, being seasoned gamers themselves, sometimes even actual gamers. With this in mind, how do we replicate a climate of risk-taking, daring and challenging learning within the classroom?
Read the article

Triangulation allows the connections between the different learning traces left by the students to be highlighted. It allows the teacher to obtain a more complete and accurate picture of each student's abilities and skills.
Read the article

The podcast as a tool for raising awareness of social issues

With the growing popularity of podcasting, many teachers are wondering about its pedagogical potential in the school context. How can it be integrated into the classroom? How can it be evaluated as a learning experience? These questions are all the more relevant since podcasting is often used as a complementary broadcasting tool for teachers, but not necessarily as a new creative opportunity for students. Yet...
Read the article

There is no consensus among educational researchers about the definition of creativity. However, among the different ways of defining this ability (Chaîné, 2012), concepts recur: production, ideas, connections, novelty... We can therefore conclude that the teacher who wishes to foster creativity in his or her students must set up situations where they can express their own ideas, in their own way, while having flexibility in the choice of tools to use.
Read the article

4 uses of video in an educational context

One of the ways to engage students in their learning is to have them experience authentic situations, i.e., concrete and grounded in reality. The pedagogical use of video, both in a consumption and a creation posture, is a good way to achieve this.
Read the article

4 ways to integrate digital technology in the geography classroom

A growing number of digital tools are leveraging real-world contexts to better understand issues related to geography courses. These resources support teachers and help students develop skills. For example, the Quebec curriculum includes the following three skills Reading the organization of a territory, Interpreting a territorial issue, and Building citizenship awareness on a global scale. Thanks to digital educational resources, the concepts taught in geography become more fun and concrete! Here are some ideas!
Read the article

4 ways to integrate digital in the art classroom

Visual arts and digital art may seem incompatible... and yet! Several tools allow you to appreciate or create a work of art depending on the objectives to be reached. Depending on the pedagogical intention, several free platforms and tools will enhance the learning process in visual arts.
Read the article

When technology opens the door to learning

When my daughter was in elementary school, other than email, there was little digital technology that gave me access to her learning. Of course, I signed many assessments and dictations on paper. My daughter also brought home some of her own work, allowing me to see some of her progress. During visits to the school or parent meetings, I had a small glimpse of what was going on in the classroom and the activities she was doing.
Read the article

In each issue of the magazine, we offer you a selection of sites and applications to discover! Discover our winter selection.
Read the article

The final grade: Other examples of learning outcomes

The Vignettes de pédagogie active, presented on the Polytechnique Montréal website, are an almost inexhaustible source of ideas for learning activities to be carried out in class and even outside of class. Search filters make it possible to quickly target those that correspond to certain criteria. Here are a few that facilitate the collection of concrete learning traces.
Read the article

The professional magazine for teaching in the digital age!

EngagED Learning magazine supports and inspires teachers, educational consultants and school administrators. There are 3 new issues per year, available in print and digital format. Subscribers also have access to exclusive online content. You can subscribe personally or take advantage of a school or institutional license.