The opinion gauge: The result of collaborative work between teachers… on break!

What do teachers do during spring break? Many continue to innovate for students! Here is the story of the collaborative construction during this week of a gauge allowing the participants of a debate to indicate and modify their opinion in real time.

What do teachers do during spring break? Many continue to innovate for students! Here is the story of the collaborative construction during this week of a gauge allowing the participants of a debate to indicate and modify their opinion in real time.

We cannot say it enough: a personal learning network can lead to little wonders. This is what was experienced by a group of teachers from completely different horizons: private schools, public schools, elementary and secondary, located from one end of Quebec to the other, also integrating ideas from across the country. -Atlantic.

It all started with a simple question from the primary school teacher. Julie chamberland, of the CS des Navigateurs, on the Facebook group " ICT in education ". She asked members of this community for suggestions of tools for the debates. She was looking for something that would allow participants to indicate and change their opinion live, plus that would show the trend on a real-time updated gauge. The precise tool does not exist, the technopedagogical advisor of the Saint-Anne College in Lachine, Jean Desjardins, helped her evolve her first document created using Google Sheets, developing ideas for Francois Jourde. Shortly after, David Beauchesne, from the Collège Mont-Notre-Dame, took over and made the tool evolve into what it is today. They have continued to share the fruit of their work in the ICT community and the idea is receiving great interest.

“Users can take a stand on what is going on during a conference or debate at any time,” explains David Beauchesne. The gauge projected on the stage adapts in real time according to the responses received. The current version works with an audience of 1000 people and will be officially tested by Julie Chamberland and her team from the CS des Navigateurs in Lévis on October 19, in front of a group of some 300 teachers, during the GRIP (Grand Gathering of Educational Innovation). It can also be used on a smaller scale, for example in a classroom, to take the pulse of students in real time.

To learn more about this gauge, test it and, who knows, use it for your needs, check out the online backgrounder. 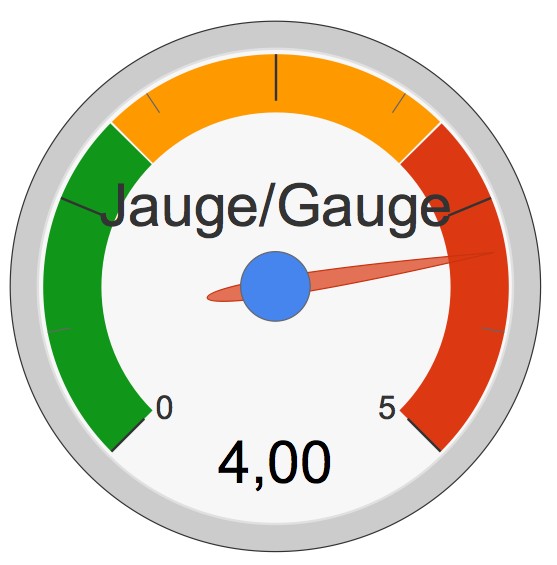